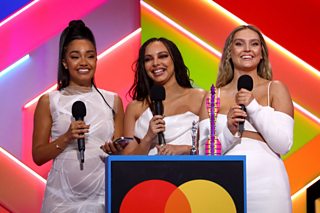 Little Mix made history at the 2021 Brit Awards after the trio become the very first female band to win the award for Best British Group.

During their speech, the group spoke about some of the difficulties they've experienced as women in the music industry and they also dedicated their award to the many British girl groups who've come before them.

The historic win isn't just great news for Little Mix, but it's also inspired lots of young performers who hope to one day find success in the world of music.

We spoke to some of the band's young fans to find out what the win means to them.