Lockdown: What are the rules are relaxing from 17 May in England, Scotland and Wales? 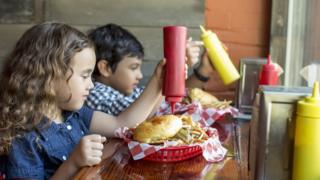 Going inside other people's homes, hugs, sleepovers and visiting indoor food and entertainment venues will all be allowed in England, Wales and most of Scotland once again from 17 May.

The ban on foreign travel has also now been lifted and replaced with new rules.

Two parts of Scotland - Glasgow and Moray - will not have their rules eased after a spike in coronavirus cases there.

Northern Ireland will review lockdown rules on 20 May, with the hope that some could be lifted on 24 May.

The changes have been made because, although the virus is still in general circulation, not as many people are getting coronavirus or passing it on, in some part because of the roll out of the vaccine.

As a result the UK's coronavirus alert level is being lowered from four to three on the advice of experts, and lots of things are set to change.

Learn more about lockdown and the roadmap out of lockdown here

PM confirms all schools in England will reopen on 8 March

Prime Minister Boris Johnson thanked everyone for their patience and sacrifices, saying, "Your efforts have so visibly paid off".

But he also warned that people should still be cautious: "Together we have reached another milestone in our roadmap out of lockdown, but we must take this next step with a heavy dose of caution".

He added: "Everyone must play their part by getting tested twice a week, coming forward for your vaccine when called and remembering hands, face, space and fresh air."

Can I hug my friends and grandparents? 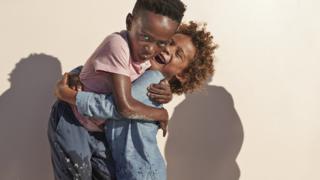 Yes, but people are being asked to be cautious, especially if the person you want to hug hasn't been vaccinated yet.

The prime minister has said people should make their own choices when it comes to having close contact with friends and family, and has urged people to consider how vulnerable someone is when deciding whether to give them a hug.

He warned the change in rules "does not mean we should throw caution to the wind" and says hugging is still a main way the virus can spread.

He also reminded people that meeting outdoors is still safer, and when meeting indoors it is safer to keep the windows open.

Scottish First Minister Nicola Sturgeon also said: "I actually feel a wee bit emotional saying this... from Monday, as long as you stay within permitted limits, you can hug your loved ones again," she said.

In Wales, some family and friends have been able to hug since 3 May.

Social distancing measures should still be followed when people are not with friends or family.

Can I go to someone else's house? 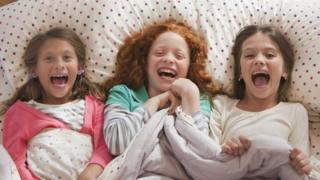 From 17 May six people, or two households, will be able to mix indoors in England.

Sleepovers are back on also, with overnight stays allowed with people not in your bubble.

That might also mean being able to visit relatives who live too far away for a day trip!

In Scotland, people can meet indoors in groups of six from up to three households.

Since 3 May in Wales, two households have been able to form a "bubble" to meet indoors.

Are birthday parties back? 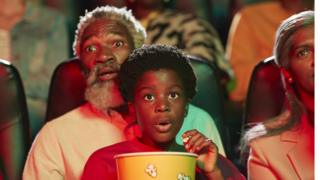 Getty Images
Have you missed going to the cinema?

Yes. Across the UK - indoor entertainment such as museums, theatres, and cinemas can open as well as indoor play areas and bowling alleys.

It would have to be a small party though, as the limits on meeting indoors is still six people (or two households in England and three in Scotland) and venues may limit the total amount of people allowed inside.

With restaurants allowed to let customers sit indoors, there'll be much less time spent having to hide from the rain.

If you fancy a bigger party then maybe have it outdoors as groups of up to 30 people are allowed to meet up outside in England.

In Scotland up to 100 people are allowed at an indoor event.

What will change in school? 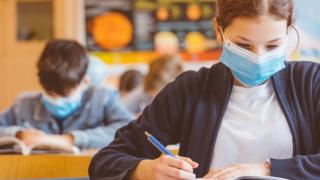 In England, face coverings will no longer be required in schools or colleges in either classrooms or communal areas.

Schools will also be able to go on trips with overnight stays.

There will also be changes to university teaching, with in-person teaching able to start again after months of online lessons.

In Scotland and Wales face coverings must still be worn in communal areas by students and teachers.

Can I go on holiday? 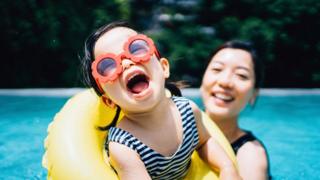 People in the UK will be allowed to take holidays abroad in a small number of countries on the green list announced last week.

Portugal and Israel are among the destinations on the government's green list, which tourists will be able to visit without having to quarantine on their return.

But not all the countries on the green list are currently open to UK tourists, with Portugal - expected to be one of the most popular - allowing travel there for essential purposes only.

This could have changed by the time the restrictions are lifted, but anyone making travel plans should certainly do plenty of research before booking a trip.

Hotels, hostels and B&Bs can also reopen, so for those looking to holiday a bit closer to home there shouldn't be any issues.

Will weddings be back on? However venues can still place restrictions on the number of people allowed.

Previously receptions could only take place outdoors at Covid-secure venues and had to be in the form of a sit-down meal.

But now they can be held indoors too as long as it is classed as a Covid-secure venue.

The same rules apply for funerals, with 50 people allowed to meet in Scotland and 30 in England.

Although the rule changes have been welcomed, people are being urged to be cautious, as the Indian variant is still an issue in the UK, with mass testing taking place in some areas in the UK.

What are you most looking forward to doing once the rules relax? Let us know in the comments.

Where can you go on holiday without quarantining?

133 comments
Back to top
unknown