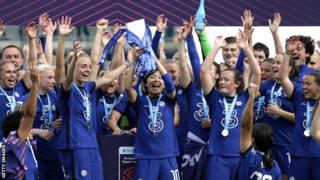 Chelsea have won the Women's Super League after beating Reading 5-0 on the final day of the season.

The result see them edge Manchester City into second place, as the London club seal their fourth title in six seasons.

Chelsea now face Barcelona in the Champions League final next week, and are still in the FA Cup.

Emma Hayes, the team's manager, said she told the players to stay focused on more glory after lifting the trophy: "I said to the players when they got their medals: 'Do you like winning? Well do it again next week'."

As the WSL season came to a close, Chelsea needed a win to guarantee the title ahead of Manchester City.

If the players were nervous, it didn't show as they took the lead after only two minutes, with a goal from German midfielder Melanie Leupolz.

After that they never looked in trouble and went on to comfortably beat Reading, with goals from England player Fran Kirby, Australian superstar Sam Kerr and Scotland's Erin Cuthbert. 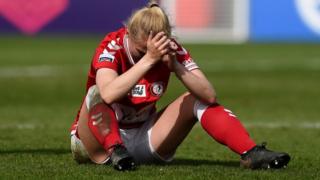 Manchester City did their bit to keep the pressure on with a one-goal win against West Ham. They qualify for next year's Champions League, along with Arsenal who held on to third, ahead of Manchester United who finish just outside the European spots.

At the bottom, Bristol City were relegated to the second division after losing at Brighton. That result helped Birmingham City stay up.

A historic season for Chelsea? 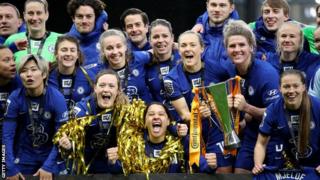 Chelsea's league title meant they are half way to a historic quadruple for the club.

They face Barcelona, who have just won the Spanish League, in the Champions League final in Gothenburg, Sweden on Sunday, 16 May.

It is Chelsea's first Champions League final, and they could become only the second English side to win it, after Arsenal in 2007.

After that final, Chelsea will then turn their attention to the Women's FA Cup. If they can go on to lift the FA Cup, they are only three games away from an astonishing fourth trophy in a season!

What do you think of Chelsea's title-win? Can they add the European title too?