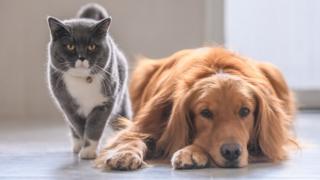 Getty Images
Animal welfare charity PDSA said in 2020 there were 10.1 million pet dogs and 10.9 million pet cats in the UK

A government taskforce has been set up to try and stop pets getting stolen.

The taskforce will be made up of officials from government departments, police and animal welfare groups and experts. They will look at the problem and try to find solutions and present their findings by autumn this year.

The ultimate guide to looking after your pets

Stealing a pet is against the law. It is a criminal offence under the Theft Act 1968 and anyone found guilty of pet theft could be sentenced to up to seven years in prison.

Although the numbers have increased, getting a pet stolen is still pretty rare.

However it can be very upsetting for people who have had it happen to them.

Home Secretary Priti Patel said: "Having callous thieves steal a much-loved pet is heart-breaking for families and it is deplorable that criminals seek to profit from this cruel crime." 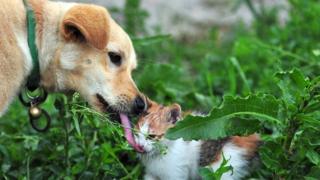 Tips for keeping your dog safe

The UK's most sought after dog breeds increased in value over the first lockdown, according to charity, Dogs Trust. These include dachshunds, chow chows, English bulldogs and pugs.

Some reports suggest that this increase in price for dogs is part of the reason there have been more thefts as criminals think they can get a lot of money for the dogs they steal.

Environment Secretary George Eustice said: "Pet owners shouldn't live in fear so we've set up this taskforce to thoroughly investigate the issue and ensure that we have the measures in place to stop these criminals in their tracks."

Pesky pooch: This dog pinches things from all over the house!

Love Your Pet Day: How much do you know about popular pets?