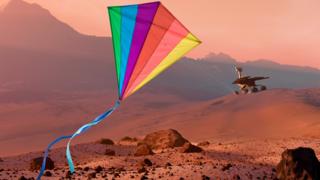 Getty Images
Who knows what the giant kites would look like (as it's still just an idea) but we hope they end up being as colourful as this artistic impression!

While this sounds like the plot of a sci-fi film, it's an idea scientists came up with in response to a competition run by the European Space Agency (ESA).

For astronauts to live at a long-term base camp on Mars, they will need to find energy to survive.

Scientists at the Delft University of Technology in the Netherlands think using a massive kite flown by robots, to harness high Martian wind speeds, could provide enough energy to sustain several astronauts in their everyday work.

Producing and storing renewable energy on Mars is not an easy task.

Mars is further from the Sun than Earth, so it only gets 43 percent of the sunlight Earth does, making solar power less effective.

Also, sending technology such as wind turbines and regular batteries from Earth to Mars is impossible as they are far too heavy.

Therefore, scientists have had to come up with a brand new method of creating energy and what better than kite-flying robots?

Roland Schmehl at the Delft University of Technology in the Netherlands and his colleagues suggested this unusual technique because the winds on Mars are, on average, faster than on Earth although the atmosphere isn't as dense.

"The higher windspeeds and lower density to some degree balance out, but not fully, so we also need to increase the surface area of the kite quite drastically," says Schmehl.

He added: "We have seen something similar with the Ingenuity helicopter that is now flying on Mars - this helicopter has much bigger rotor blades than the small drones that you see here on Earth." 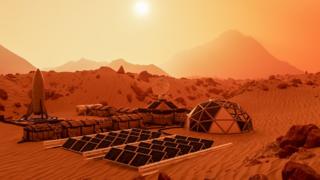 Getty Images
Would a base on Mars look something like this?

The kite would have a surface area of 50 square metres - which is pretty huge!

It would be attached to a large drum on the ground with a cable, and as the kite flew up into Mars' sky, it would pull more of the cable which would rotated the drum - creating energy!

Pairing these two methods would, according to the team, provide enough power to sustain a base on Mars, so astronauts could have power at night and store energy for different seasons.

And that's not all.

The team predicts a short-term energy solution through the use of lithium-sulphur batteries, and a longer term storage system would be made possible by compressing carbon dioxide gas from Mars's atmosphere in underground caverns - this gas could later by decompressed to reclaim the stored energy.

This whole system could provide about 127 megawatt-hours of energy per year - equivalent to the power produced by about 75 barrels of oil.

"If we relate it to Earth, it would power about 20 households here in the Netherlands or about five households in the US," says Schmehl.

"[A Mars base camp] is basically one household, four to five astronauts with a small lab."

What do you think of this story? Let us know in the comments below.