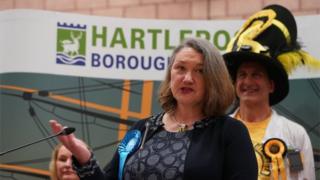 Hartlepool has a Conservative Member of Parliament (MP) for the first time since the constituency - the area that your elected MP represents - was created.

Jill Mortimer has also become the first ever female MP for the area after she beat her closest rival, Labour's Paul Williams by nearly 7,000 votes.

The Hartlepool constituency in north-east England was formed in 1974 and had voted for a Labour MP in every vote since - until Thursday's poll.

The result is a blow for Labour leader Sir Keir Starmer in his first Parliamentary election test since taking over the party in April 2020.

The Conservatives are led by Prime Minister Boris Johnson and this will be seen as a big win for his party.

A guide to the Scottish, Welsh and local elections 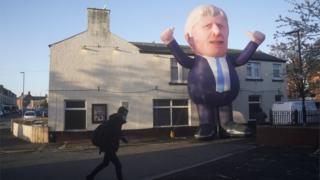 Often by-elections like this are occasions when the party in government loses votes. It's very unusual for them to beat the main opposition Labour in what previously was such a strong area for them.

Mr Johnson's party are saying the result shows that the is country is behind the prime minister after his election win in 2019.

"Labour have taken people in Hartlepool for granted for too long," said Ms Mortimer in her acceptance speech.

"I heard this time and time again on the doorstep and people have had enough and now, through this result, the people have spoken and have made it clear it is time for change."

[The result] is absolutely shattering... We need to drive change harder and faster if we're going to win back the trust that has been broken over many, many years between too many British people and the Labour Party

It was one of many elections taking place across Britain on Thursday, with voters picking representatives for the Scottish Parliament and Welsh Senedd, as well as mayors and local councils in England, and police and crime commissioners.

The results will come in over the next few days.

What is devolution and how does it work across the UK?