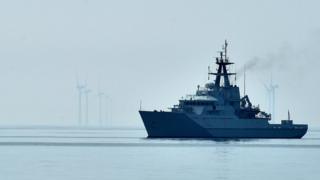 Royal Navy ships have been sent to the waters around Jersey, by the government, to "monitor the situation" during an argument between French and Jersey fishing boats.

The ships were sent to Jersey, the largest of the Channel Islands, where about 60 French and Jersey boats are protesting over Brexit fishing rights after Brexit.

French fishermen are unhappy because they feel Jersey have made it unfairly harder to get permission to fish.

French authorities have also sent two navy vessels to stay in French waters and be nearby for the fishermen's safety.

The dispute has even led to threats of cutting off Jersey's electricity. So what's going on? Let's find out more. 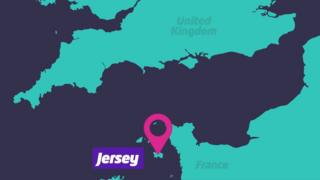 Navy ships HMS Severn and HMS Tamar are patrolling the waters around Jersey. The government say they have sent them to patrol and to monitor what's going on.

The boats blocking the port of the island's capital St Helier are protesting against new fishing rules that have come in since the UK left the European Union.

The French fishermen feel that new rules to get a license or permit to fish there, which were brought in last week by the Jersey government, are unfair and go beyond what was agreed during Brexit. 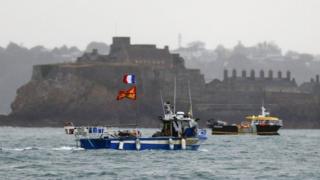 Tempers have been raised by fishermen and by politicians with French Maritime Minister Annick Girardin even threatening to cut off Jersey's electricity.

95% of Jersey's electricity is delivered by three underwater cables from France.

Mr Girardin told French parliament that the new rules which control access to fishing in the Channel Islands waters were unacceptable. 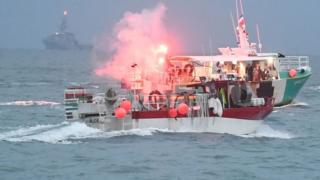 SWNS
Fishing boats have been lighting flares in protest

French authorities say that the new measures introduced had not been communicated to the EU, making them "null and void".

French fisherman have said they are going to wait in Jersey's waters until they get a response.

Although flares were seen to be set off, the protest has remained peaceful. Jersey officials have said they are meeting with the protesters today to try and solve the problem. 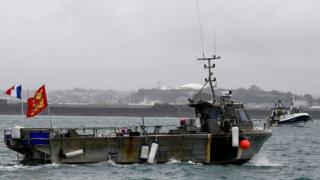 Ian Gorst, Jersey's external relations minister told BBC News: "It's important that we respond to threats, but the answer to this solution is to continue to talk and diplomacy."

French officials say they are monitoring the situation "very closely", saying that it is "currently calm and we hope that this will remain the case".

According to the news agency AF, Dimitri Rogoff, head of fisheries for the Normandy region, said the boats would not try to block St Helier and would return to France in the afternoon,