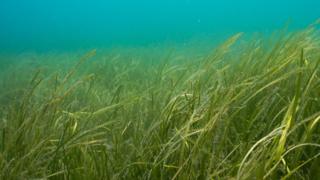 Getty Images
Seagrass captures and stores a lot of carbon dioxide, which is a harmful greenhouse gas

The Marine Conservation Society (MCS) and Rewilding Britain are calling on the government to focus on rewilding our oceans so the country can meet its goal of net zero carbon emissions by 2050.

Rewilding is a conservation method aimed at restoring and recreating habitats so that nature will be able to revive itself.

The idea is rewilding will help slow down the effects that climate change has had on Britain's wildlife.

Until now, the focus has been on restoring habitats on land, but campaigners want ocean rewilding to take place with the same level of urgency as reforestation.

How re-wilding could protect species in Britain 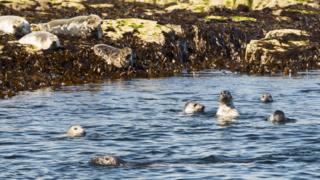 This is 50 million tonnes more than the carbon stored within all of the UK's forests.

The two organisations want the government to develop an "ocean charter", which would include nature recovery plans, climate change reduction and adaptation policies such as: 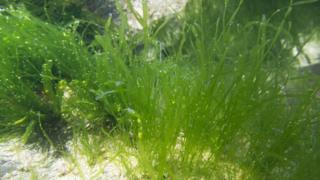 Getty Images
Restoring seagrass would help the UK meet its carbon cutting goals, according to the report

The research found that restoring seagrass, saltmarsh, oyster reefs and kelp forests would give Britain a massive leap forward in meeting its carbon cutting goals.

The UK's saltmarsh and seagrass habitat is thought to store 43,000 tonnes of carbon annually, the report said, a rate of between two and four times that of tropical forests.

The research also found that the UK's existing stock of saltmarshes and seagrass beds have the carbon storage potential of between 1,000 and 2,000 km2 of tropical forests.

Why seagrass is an environment hero

The Government has committed to planting 11 million trees by 2022, but now the MSC wants to see similar targets for the ocean and wetlands.

By 2019, 21.8 million hectares of UK waters had some degree of environmental protection, according to the Office for National Statistics.

But the two organisations say there is little or no enforcement banning the most damaging activities.

What impact does human activity have on the ocean? 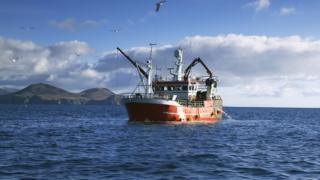 Fishing methods, along with mining and oil and gas extraction, disturb the seabed, releasing stored carbon into the water column and reducing the ocean's capacity to store CO2.

It also rips out plant life, which is key to storing carbon.

Currently, bottom trawling and dredging are only banned in 2% of UK seas, the report found.

The team also discovered that if no action is taken, the UK's sea shelf sediments could lose 13 million tonnes of stored carbon over the next decade.

Rebecca Wrigley, chief executive of Rewilding Britain, said: "Allowing a rich rainbow of underwater habitats and their sea life to recover offers huge opportunities for tackling the nature and climate crises, and for benefiting people's livelihoods." 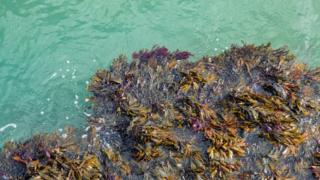 In 2015, world leaders signed the Paris Climate Agreement, which was a huge international deal to do something about climate change. The main goal is to keep the planet's temperature rise under 1.5C above preindustrial levels.

In order to do this, emissions need to fall to 25 billion tonnes annually in the next decade.

It is thought rewilding key marine ecosystems around the world could lock up 1.83 billion tonnes of carbon each year - 5% of the savings needed globally.

A spokesperson for the Department for Environment, Food and Rural Affairs (Defra) said: "The UK is a global leader in the fight to protect our seas, with our 'Blue Belt' of Marine Protected Areas extending across 38% of UK waters. We recognise the important role blue carbon habitats play in supporting adaptation and resilience to climate change.

"This is why we are leading calls for a new global target to protect at least 30% of the ocean by 2030 and examining stronger protections for our 'Blue Belt' of Marine Protected Areas."

Conservation: How re-wilding could protect species in Britain

Climate change: UK promises to cut emissions by two-thirds in next 10 years