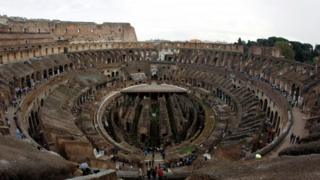 Rome's ancient Colosseum will get a brand new floor as part of plans announced by the Italian government.

It will give visitors the chance to stand where gladiators once fought each other in battle.

The floor, which is being designed by Italian company Milan Ingegneria, is expected to be finished by 2023.

What was the Colosseum?

The Colosseum was the biggest amphitheatre in the Roman Empire.

Gladiatorial fights and other public spectacles were hosted in front of crowds of at least 50,000 people. 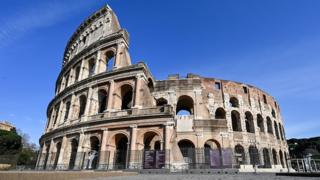 The 2,000-year-old monument has no floor at the moment.

It was removed by archaeologists in the 19th Century, exposing the underground network of tunnels where gladiators and animals were held before the Roman sports began.

Mr Franceschini said the "extraordinary" new floor would allow visitors to "see the majesty of the Colosseum" from its centre.

"It's another step forward toward rebuilding the arena, an ambitious project that will aid the conservation of the archaeological structures while getting back to the original image of the Colosseum," Mr Franceschini said. 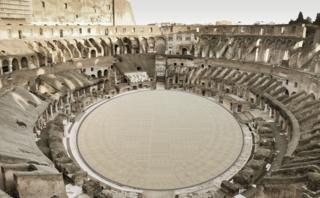 The winning design involves installing hundreds of wooden slats that can be rotated to allow natural light and air into the underground chambers.

While the coronavirus pandemic has limited tourism, the Colosseum remains one of Italy's most famous landmarks.

Before the pandemic struck, the monument attracted about 7.6 million people in 2019.

Italy Lockdown: Family tell what it's like after three weeks