Manchester United's Premier League match against Liverpool had to be called off on Sunday after protestors stormed onto the pitch at Old Trafford.

Thousands of demonstrators had gathered peacefully outside Manchester United's home stadium as part of a protest against the club's ownership.

However, some of the protestors became violent, and around 200 demonstrators broke into the stadium and got onto the pitch.

Both clubs and the Premier League decided the match had to be postponed.

This is the first time a Premier League match has been postponed because of fan protests.

But why were people protesting? 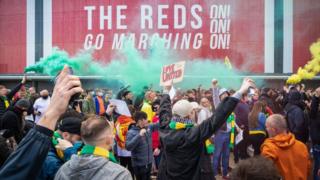 On Sunday 2 May Manchester United were scheduled to play against Liverpool in a Premier League match, that if United had lost, would have crowned their rivals Manchester City as champions.

However, before the match, thousands of fans gathered outside Old Trafford in Manchester to peacefully protest.

Supporters are currently not allowed into grounds because of the coronavirus pandemic, but around 200 of the demonstrators managed to get onto the pitch to protest.

As well as this, some of the protestors became violent, and two police officers were injured during clashes.

"The behaviour displayed by those at both Old Trafford and the Lowry Hotel was reckless and dangerous." said Greater Manchester Police assistant chief constable Russ Jackson.

For this reason, local authorities and the Premier League agreed to postpone the match until a later date. 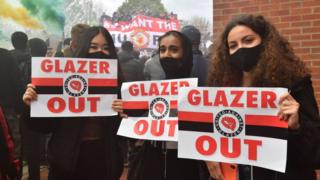 This is the third major protest Manchester United fans have held against the club and its owners in recent days.

One of the main reasons for the protests is because of the club's owners - the Glazer family, who took over the club in 2005.

For the last 16 years lot's of supporters have opposed the American owners, as many believe they only care about making money and not United's rich history.

The Glazer family were also key backers of the now-scrapped European Super League - which upset fans even more.

What have the clubs said? 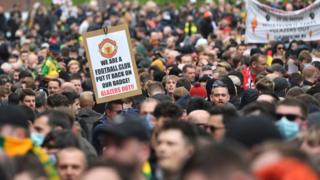 "However, we regret the disruption to the team and actions which put other fans, staff, and the police in danger."

Liverpool, said they were in "full agreement" to postpone the game.

"It is our position that public safety must be the number one factor in any such decision, with the ability to provide a secure environment for the participants, staff and officials being a particular priority," said the Anfield club.

"It was clearly not possible for this to be guaranteed due to a situation which escalated rapidly." 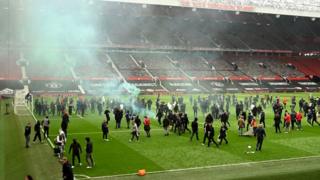 The people who invaded the pitch have been widely criticised for their actions, and fans have said they don't represent all Manchester United supporters.

A spokesperson for the Premier League said: "We understand and respect the strength of feeling but condemn all acts of violence, criminal damage and trespass, especially given the associated Covid-19 breaches.

"We sympathise with the police and stewards who had to deal with a dangerous situation that should have no place in football."

Liverpool v Manchester United: Why are they rivals?