Check out this amazing 3D-printed house in the Netherlands 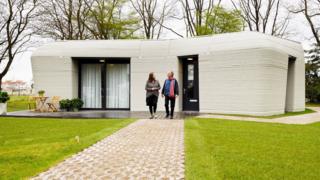 Bart van Overbeeke
The house is inspired by the shape of a boulder.

This couple have become the first people in Europe to live in a house that has been completely 3D-printed!

That's right, this house was designed and built layer by layer, using a giant 3D-printer.

It's part of a special collaboration between Eindhoven University of Technology and the Vesteda housing corporation called Project Milestone, and is the first of five homes planned to be built in Eindhoven in the Netherlands.

But how do you 3D-print a house? Find out below...

Guide: Will 3D printing take off?

How do you 3D-print a house? 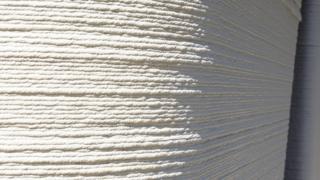 The house was designed by an architect and printed using a huge robotic arm in a special warehouse.

The printer uses a nozzle (a bit like the one you'd use for icing a cake) that squirts out specially-formulated cement (which is said to look and feel a bit like whipped cream!) to print out the building, layer by layer.

Once the house had finished being printed it was transported by lorry to the building site where it was placed on a foundation, and a roof and window frames were added.

Lots of building experts think 3D-printing could be a good way to save money and be better for the environment, as it reduces the amount of cement used.

It took around 120 hours to 3D-print the house, compared to building a house in the traditional way, which can take around 1-2 years to build. 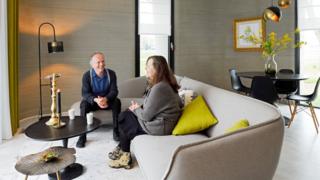 The new owners Elize Lutz and Harrie Dekkers, will pay €800 (£695) a month to live in the house for six months, after they responded to a request for volunteers.

"I saw the drawing of this house and it was exactly like a fairytale garden," said Elize "It is beautiful".

"It has the feel of a bunker - it feels safe," added Harrie.

Construction companies in the US and France have already been using 3D-printing to build parts of homes, but this one is the first to be fully built and have people live in it.

So, will 3D printing change the way homes are built in the future? Let us know what you think in the comments below.

Inside the house of the future

3D printed houses planned for Mars and other planets