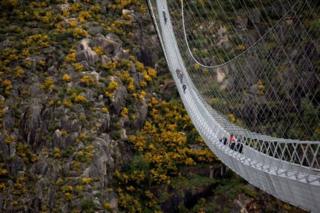 Whoa - whatever you do don't look down!

This is the world's longest pedestrian suspension bridge - it is 516 metres long and hangs 175 metres up above the river Paiva in the Arouca Geopark in Portugal.

Before it was officially opened to the public, residents from the nearby town, Arouca, were given the chance to walk across it.

It's hoped the bridge will bring in lots of tourists to the area - but they'd have to be pretty brave!.

Check out these other amazing bridges

'Bridge of hope' for endangered gibbons 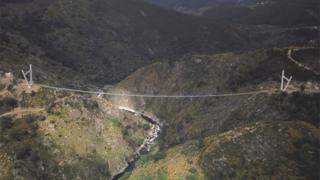 The first person to walk over the bridge was Hugo Xavier.

He said: "I was a little afraid, but it was so worth it," a relieved Xavier said on the other side. "It was extraordinary, a unique experience, an adrenaline rush." 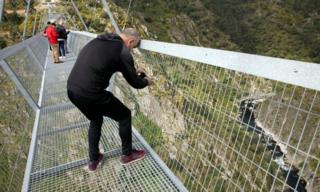 Others said they didn't look down, but would recommend the experience of being up there to anybody who asked.

The bridge itself has taken two years to build and the town's mayor has called it a breath of fresh air and a fundamental attraction for tourists. 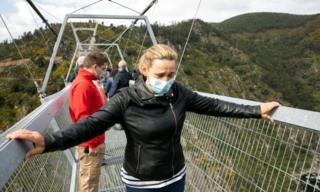 Reuters
Some walkers enjoyed the experience of being 175 metres in the air, a little more than others, quick look up not down!

The bridge has been named "Arouca 516" and it crosses the Paiva River gorge.

The gorge already has some wooden walkways that are about 5 miles long.

Arouca 516 breaks the record for the longest pedestrian suspension bridge.

The previous winner was the Bridge at Randa, in the Swiss Alps which held the record from 2017. 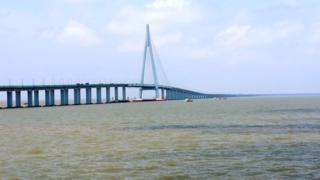 The worlds longest ever bridge is the Danyang-Kunshan Grand Bridge in China.

It runs between Shanghai and Nanjing and carries the Beijing-Shanghai High-Speed Railway across the Yangtze River delta.

The Queensferry Crossing: All you need to know

43 comments
Back to top
unknown