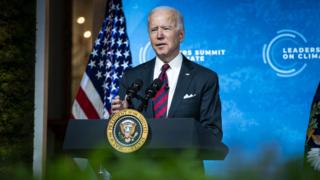 During the meeting, he pledged to cut the country's carbon emissions by 50-52 percent below 2005 levels by the end of this decade. This essentially doubles their previous promise.

President Biden has made tackling the climate crisis a main priority and re-joined the Paris agreement on his first day in office.

Read on to find out what else happened at the global leaders summit.

More on the climate crisis

What did Biden say? 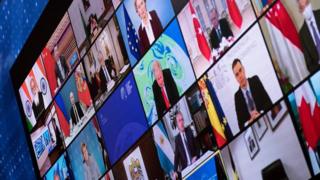 President Biden wants the US to be a global leader on fighting climate change. It comes after President Trump pulled the country out of the Paris climate agreement during his time in office.

The Paris agreement happened in 2015. It was a huge international deal to do something about climate change and was agreed by leaders from 195 countries at a big meeting in Paris, France.

The Americans hope that their ambitious new plan will encourage China, India and others to go further before the important COP26 meeting, hosted by the UK in November.

COP26 will take place in Glasgow and is seen as a crucial climate meeting for keeping the planet's temperature rise under 1.5C above preindustrial levels.

When announcing the new emissions goal, Mr Biden said: "The cost of inaction keeps mounting. The United States isn't waiting. We are resolving to take action.

Nathaniel Keohane from the US Environmental Defense Fund said: "By announcing a bold target of cutting emissions 50-52 percent below 2005 by the end of the decade, President Biden has met the moment and the urgency that the climate crisis demands.

"This target aligns with what the science says is necessary to put the world on the path to a safer climate."

How did Boris Johnson react to Biden's new pledge? 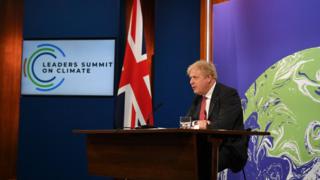 Boris Johnson thanked President Biden for returning the United States to the front of the fight for climate change and called his announcement about cutting US greenhouse gas emissions "game-changing".

"We can do this together across the world. It's going to mean the richest nations coming together and exceeding the $100b commitment they already made in 2009," he said.

Until now the government had been aiming to meet this target by 2050, but now it is moving the target forward by 15 years after listening to advice from the independent Climate Change Committee (CCC).