Dinosaurs: Could you run faster than a T-Rex? 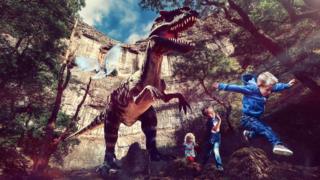 Getty Images
Who would win this race?!

Although the giant meat-eating dinosaur is often famed for its ability to chase down its prey - something made popular in lots of films - researchers at the Dutch Naturalis museum have made a interesting discovery.

In fact, the infamous Tyrannosaurus rex is much slower than once thought and most likely moved at a human walking speed.

So, how did the scientists make this revelation? Read on to find out.

What did the researchers do? 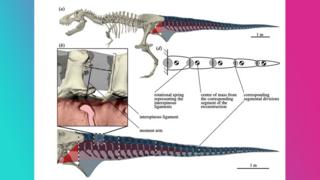 Pasha A. van Bijlert, Royal Society
The team reconstructed the muscles and skeleton of a Tyrannosaurus rex to find out the natural speed of the tail

He used a computer to add muscles to the skeleton to discover that the huge tail plays an important part in how the dinosaur moved and at what speed.

It's likely that the dinosaur's preferred speed was 4.61 kms (2.86 miles) an hour, close to the walking pace of humans and horses.

The team looked at leg muscles, as in previous studies, but also tail movement - which would minimise the amount of energy the dinosaur used.

"The tail would sway up and down with each step (like a giraffe's neck). If the step rhythm and tail natural (speed) were matched, the tail would resonate, maximizing energy storage," Van Bijlert said on Twitter.

Could a human REALLY outrun a T-Rex? 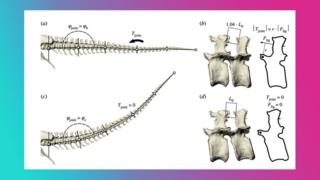 Pasha A. van Bijlert, Royal Society
The scientists looked at the joints in a T.rex tail to figure out how it moved

It's difficult to say for certain.

The researchers said they were looking at the iconic predator's walking pace and are still researching its possible top speeds. So maybe you could run faster than the T-Rex can walk! Which is still pretty cool.

Unfortunately it can't be put to the test as dinosaurs died out more than 60 million years before people appeared on Earth.

What do you think of this story? Let us know in the comments below.

T-Rex: Did the Tyrannosaurus Rex hunt in a pack like wolves?