Elephants are known for their long and powerful trunks and a group of scientists have created a robot that mimics the movement of the animals' super long nose!

The team, based at the University of Tubingen in Germany, used 3D printing equipment to develop the robot trunk. It's made up of individual segments which are stacked on top of one another and these are held together by special joints controlled by gears. The gears, driven by several motors, allow the trunk to tilt in lots of different directions.

The robot can not only bend like an elephant's trunk, but it can also get extend or shorten in length.

This robot dog knows how you're feeling

The scientists were able to create a trunk made up of 10 individual segments, but they say its full length could be doubled if more powerful motors are used.

They carried out lots of tests with the robot and discovered that it's able to direct the tip of its robotic trunk to a target less than a centimetre away.

Robots like this which are controlled using artificial intelligence (AI) rely on a complex neural network which mimics or simulates the way in which the human brain works.

Neural networks are made up of a series of algorithms or mathematical instructions which imitate the operations of the human brain by recognising relationships between lots and lots of complex data. 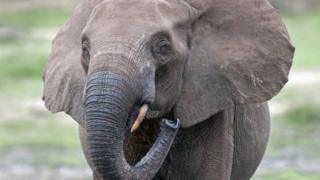 In order for the scientists to control the trunk, they were able to input example instructions needed to move the robot in certain ways and this produced a specific algorithm.

The team used the elephant trunk robot as proof for a new type of algorithm called a spiking neural network which works in a way very similar to real brains.

A small robot with a relatively basic computer could run a spiking neural network and continue to train itself when put to work, becoming more efficient or learning new tasks over time - how clever is that!

"Our dream is that we can do this in a continuous learning set-up where the robot starts without any knowledge and then tries to reach goals, and while it does this it generates its own learning examples," Dr Sebastian Otte, who worked on the project, told the New Scientist.

Gellyphant: Scientists make a robot elephant made from jelly

The robot sheep dog helping out on the farm