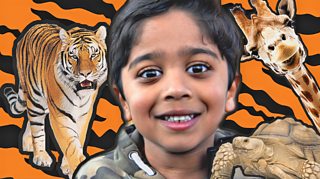 Six-year-old Aneeshwar from Warrington is a wildlife enthusiast who shares amazing facts on his own YouTube channel, but he had never seen some of his favourite animals in real life before.

Last month he was invited on to BBC breakfast TV and spoke to his hero, Deadly 60 presenter, Steve Backshall. But knowing how much he loved animals the BBC Breakfast team had another surprise for him.

After coronavirus rules were relaxed and zoos in England were able to reopen again, Aneeshwar joined BBC reporter Luxmy Gopal for a special tour of Knowsley Safari Park in Merseyside.

While meeting the animals, Aneeshwar shared some of his amazing wildlife facts too.