Yuri Gagarin: Who was the first person in space? 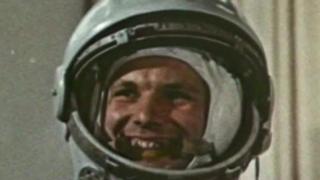 It has been 60 years since a Russian cosmonaut called Yuri Gagarin became the first person in space.

He completed a full orbit of the Earth on 12 April 1961 on-board the spacecraft Vostok 1.

It was a huge victory for the Soviet Union in the so-called 'space race' against America.

Here is everything you need to know about his amazing story. 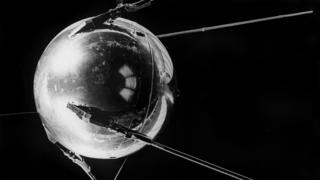 Sputnik 1 (pictured) became the first aircraft to orbit the Earth

Following World War II, there was big conflict called The Cold War between Russia and western countries, including Britain and America.

It was a war between two ideas and ways of ruling - communism (the east) and capitalism (the west).

The Russians operated a communist state called the Soviet Union (from 1922 to 1991), while western countries like the US were capitalist countries.

Throughout the Cold War, communist and capitalist nations tried to out-do each other, competing to develop the best technologies and weapons.

Both sides saw space exploration as one of the biggest demonstrations of power and went about spending lots of money to try and get there first.

The Russians managed to make it into space first in 1957 when their un-manned aircraft, Sputnik 1, did a full orbit of the Earth.

They then followed that up by sending a dog into space on Sputnik 2.

The dog was called Laika and the success of the mission gave the Russians the confidence that they could successfully send a human into space.

The success of the Russian missions brought about the creation of the American space agency, Nasa. 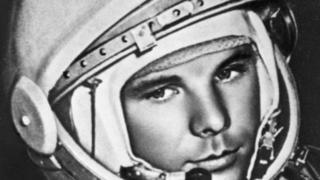 Yuri Gagarin was the son of a carpenter who grew up on a farm and survived the Nazi occupation of Russia.

He joined the Soviet Air Force in 1955 and soon became one of the top pilots in the country.

When the decision was made to send a man up into space Gagarin was chosen ahead of his main rival, Pavel Romanovich Popovich, because he was Russian and Popovich was Ukrainian.

On April 12, 1961, Vostok 1 lifted Yuri Gagarin into space, making him the first human being to travel there.

His orbit lasted 1 hour and 48 minutes in what was a very dangerous mission. During the flight he lost radio contact with Earth for 23 minutes.

He landed successfully onto a farm in Kazakhstan using a parachute, and quickly became one of the biggest celebrities in the Soviet Union.

He toured the world after the flight, visiting over 30 countries including England where he went to London and Manchester.

However, he died just seven years later in 1968 at the age of 34 during a training jet crash, and was buried with former Soviet leaders near the Kremlin Wall. 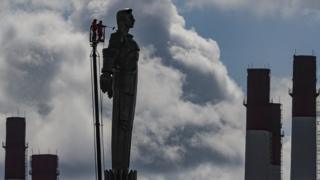 SERGEI ILNITSKY
Gagarin is remembered as a national hero in Russia and has several statues across the country including one which is 138 foot tall.

Gagarin's successful trip into space really upset the American president, John F Kennedy, who had only just made it into office.

So much so that he banned Gagarin from visiting the US during his world tour.

He sent a message to his vice president, Lyndon Johnson, asking: "Do we have a chance of beating the Soviets by putting a laboratory in space, or by a trip around the moon, or by a rocket to go to the moon and back with a man?"

On July 20, 1969, American astronaut Neil Armstrong, accompanied by Edwin "Buzz" Aldrin, piloted the Apollo 11 space craft and became the first people to land on the moon.