Euro 2020: The groups, the schedule and the ones to watch at 2021's biggest football competition

The rearranged Euro 2020 tournament kicks off on 11 June as Italy face Turkey at the Stadio Olympico in Rome.

The coronavirus pandemic has put the 'festival of football' back a year to 2021, but 24 sides will still play across 11 different cities in Europe.

England, Scotland and Wales have all qualified - it's the first time since 1958 that these three home nations have been in a major tournament together.

Here is everything you need to know about Euro 2020.

Euro 2020: Ones to watch from England, Wales and Scotland 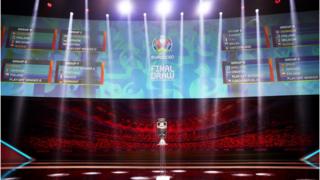 It was originally planned to run from 12 June to 12 July last summer but had to be postponed because concerns over player and fan safety during the coronavirus pandemic.

There are 24 teams who have qualified for Euro 2020 and they will play in 51 matches across 11 host cities in Europe. 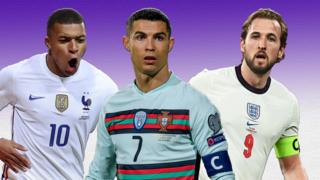 Home nations England, Scotland and Wales have all qualified for Euro 2020.

It's Scotland's first major tournament since the 1998 World Cup.

All the usual suspects are there including Euro 2016 champions Portugal and World Cup 2018 champions France.

Finland are one of the surprise teams in the tournament, qualifying for their first European Championships. 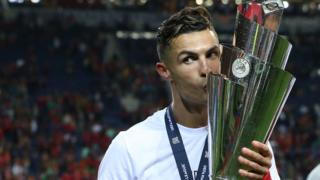 Gualter Fatia
Euro 2016 winners Portugal will be looking to hold onto their title with the help of their talismanic captain, Cristiano Ronaldo (pictured)

Currently No. 65 in Fifa's world rankings, North Macedonia will be the biggest outsider at Euro 2020.

They qualified for the first time in their 27-year existence as a country.

If the world rankings are anything to go by then the favourites are the number one ranked team, Belgium.

Italy will be hoping to have a good tournament after they failed to qualify for the 2018 World Cup.

Spain and Germany have also qualified. They currently hold the record for the most European Championship victories with three titles each. 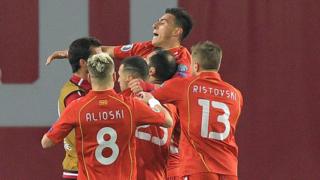 Wales are joined in Group A by Turkey, Italy and Switzerland.

Number one ranked country Belgium are in Group B with Denmark, Russia and first timers, Finland.

In Group C, keep an eye out for North Macedonia who come up against the Netherlands, Ukraine and Austria.

England and Scotland come head-to-head with each other in Group D alongside 2018 World Cup finalists Croatia and the Czech Republic.

Group F is one to really watch out for because it features Euro 2016 winners Portugal, World Cup 2018 winners France and three times Euro champions Germany. 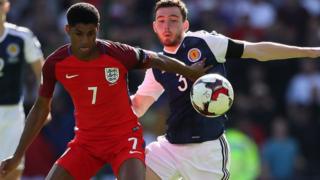 Matthew Ashton - AMA
England's Marcus Rashford and Scotland's Andy Robertson battle it out the last time the countries met in 2017. The game ended in a 2-2 draw.

The tournament kicks off with a Group A tie between Italy and Turkey on 11 June in Rome at the Stadio Olympico stadium.

England start their Group D campaign against Croatia on 13 June at Wembley Stadium in London.

They're both joined in Group D by Scotland who play Czech Republic on 14 June at Hampden Park in Glasgow.

England and Scotland then go head to head at Wembley on 18 June.

Wales start their Group A campaign against Switzerland on 12 June in the Olympic Stadium in Baku, Azerbaijan.

Germany battle it out with France and Portugal in the group to watch.

France play Germany in Munich on 15 June and then Portugal battle it out with France on 23 June in Budapest, Hungary. 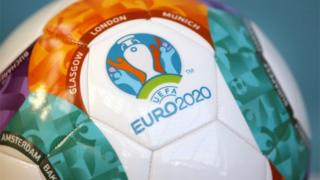 Traditionally, European Championships are held in one country but, to celebrate the tournament's 60th birthday, Uefa selected 12 cities across the continent as hosts.

Dublin's Aviva Stadium and Scotland's Hampden Park were both included as hosts but Dublin have since pulled out, leaving 11 cities.

Wembley Stadium in England will host both the semi-final matches and the final.

Concerns over having fans in the grounds during the coronavirus pandemic has meant that each host has had to submit its safety proposals for those attending.

Attendances will have to be a lot lower than capacity but Uefa is keen to have as many fans inside venues as possible.

When are the Euro 2020 semi-finals and final being played? 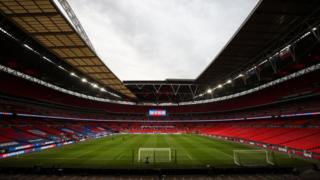 The knockout rounds will run from June 26 to July 11.

Both the semi-finals and the final will be played at Wembley Stadium in London.

The semi-finals will take place on 6 and 7 July.

The final will take place on 11 July.

Game 4: Group B winners vs third-placed side from Group A/D/E/F; Kick-off 8pm (Bilbao)

Five players to watch at Euro 2020 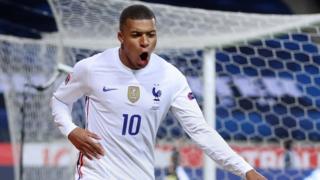 With Lionel Messi and Cristiano Ronaldo approaching the final years of their illustrious careers, Euro 2020 could be the moment that French superstar Kylian Mbappe firmly grabs hold of their crown.

Despite only recently celebrating his 22nd birthday, the Paris St Germain striker is already a World Cup winner and has scored 122 goals in just three seasons of club football.

He'll be hoping to add to his 16 goals for France in a tournament that sees them as one of the favourites to win. 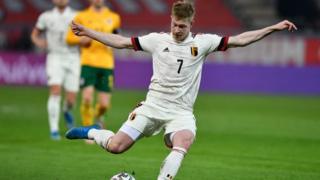 When you play for the number one ranked country in the world, there's always pressure to deliver.

And, having a good delivery is what Manchester City's Kevin de Bruyne does best.

The midfielder is regarded as one of the best players in the world but he's never won any major honours at international level or in Europe with City.

With Belgium coming towards the end of their so-called 'golden generation' era, the pressure is on for De Bruyne and co to win the whole tournament.. 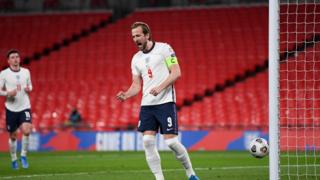 Tottenham Hotspur striker Harry Kane was the top scorer at the 2018 World Cup with six goals for England.

He'll be hoping he can replicate that form in the Euros and help his country better their fourth place finish in the last major tournament.

Kane won the Golden Boot for most goals scored in the Premier League this season and is one of the most wanted strikers in the world. 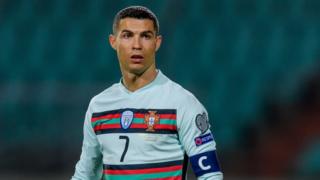 The debate as to whether Cristiano is the greatest player of all time will continue for many years to come.

However, he can cement himself as the top scoring international footballer of all time if he manages to score a few goals at Euro 2020.

Ronaldo has 103 goals for Portugal and is now just six behind all-time leading international scorer Ali Daei, who scored 109 goals for Iran.

What are the chances of Ronaldo breaking that total in the final of the Euros? It's over to you Cristiano. 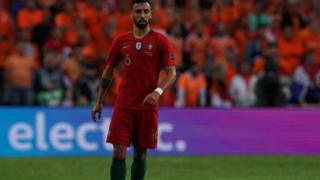 No player has made more impact in the past 12 months than Manchester United's Bruno Fernandes.

Since joining the Red Devils last winter, Fernandes has been involved in more goals than any other player in the Premier League.

He'll be hoping to take that form into the Euros and start replicating those numbers on the international stage for Portugal.

Currently, he's only scored two goals in 27 appearances for his country.

Wildcard players to watch out for at Euro 2020 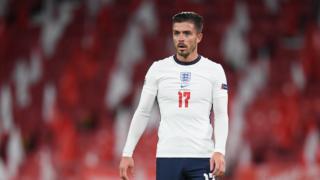 The Aston Villa midfielder is seen by many England fans as a hidden gem who isn't as well known in Europe because he's never played in the Champions League or Europa League.

He's been compared to England legend Paul Gascoigne for his dribbling ability, and lots of pundits think he could make the difference in Gareth Southgate's squad if chosen. 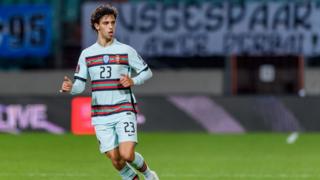 A lot of pressure comes with being one of the most expensive teenagers of all time.

In 2019, Atletico Madrid decided to spend £113 million on a young Portuguese striker who had only played 43 senior games of football.

That man was Joao Felix and he's since fallen off the radar a bit as he's taken time to get used to Atletico's tough playing style.

However, Felix has shown real signs of his true potential this season and could be one of the players of the tournament if given the right kind of service by the likes of Cristiano Ronaldo and Bruno Fernandes.

Which stars will be missing from Euro 2020? 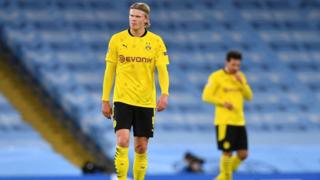 Getty Images
Borussia Dortmund striker Erling Haaland won't be at the Euros after his country. Norway, failed to qualify for the competition

The superstar striker everyone is talking about, Erling Haaland, won't be at Euro 2020 because his country Norway failed to qualify.

That also means there'll be no Martin Odegaard.

Jan Oblak is widely seen as one of the best goalkeepers in the world but he won't be there because Slovenia also failed to qualify.

Serbia didn't make it into the tournament so there'll be no Sergej Milinkovic-Savic or Dusan Tadic. 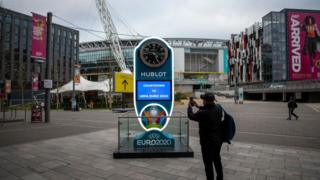 All the Euro 2020 matches will be available to watch for free on the BBC and ITV.

Wales kick off their campaign against Switzerland on Saturday 12 June at 2pm on BBC One.

England's opening match against Croatia will be on Sunday 13 June at 2pm on BBC One.

Scotland then play Czech Republic on Monday 14 June at 2pm on BBC One. 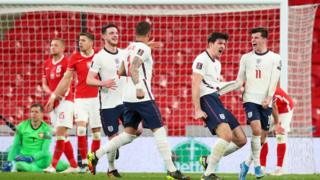 England manager Gareth Southgate will be hoping he can go one further from the 2018 World Cup and take his team to the final of Euro 2020.

He has an almost fully fit squad to choose from and is expected to name an experienced squad for the tournament.

England have one of the most in-form strikers in world football in Harry Kane.

They also have some of the most highly-regarded young players in the world including Manchester City's Phil Foden and Borussia Dortmund's Jadon Sancho.

England face Croatia, Scotland and Czech Republic in their group.

It'll be the first time England and Scotland have faced each other in a major tournament since Euro 96, when England won 2-0.

If England make it through to the latter stages they'll play the semi-final and final in their home stadium, Wembley. 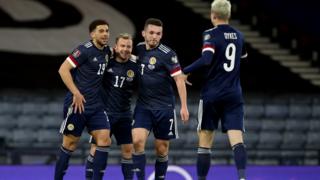 It's the first time Scotland has made it into a major tournament since 1998.

Scotland manager Steve Clarke will be hoping to use some home advantage at Hampden Park to get his side through a tough group against England, Croatia and Czech Republic.

The Scottish government has confirmed that fans will be allowed into the matches at the stadium, with around 12,000 fans being allowed in.

Scotland are known as a solid team with Liverpool star Andy Robertson and Arsenal fullback Kieran Tierney marshalling the backline, and Manchester United midfielder Scott McTominay's sitting just in front of them. 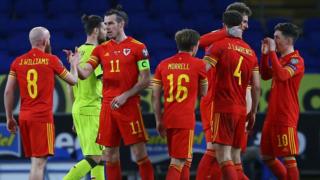 After being the surprise package at Euro 2016, Wales are back again with a new-look side and some familiar old faces.

They will be hoping the form of the rejuvenated Tottenham winger Gareth Bale and Juventus midfielder Aaron Ramsey will help them through a tricky group which sees them go up against Switzerland, Italy and Turkey.

The old guard is joined by exciting new talent like Joe Rodon of Tottenham Hotspur and Dan James of Manchester United.

In 2016, Wales made it all the way through to the semi-final stage before being dumped out of the competition by eventual champions, Portugal.

Euro 96: The A to Z of the last football championship in the UK

Who is Jude Bellingham?