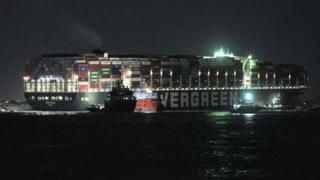 Progress has been made in an attempt to free a giant container ship blocking the Suez Canal in Egypt.

The Suez Canal Authority (SCA) have been working to try to free a giant ship called The Ever Given after it was hit by "a sudden strong wind" which caused the ship's hull to hit the bottom of the canal and get stuck.

The Suez Canal is pretty important as it connects the Mediterranean to the Red Sea and is the shortest sea link between Asia and Europe - making it one of the busiest trade routes in the world.

Canal officials say they have made some progress in trying to re-float the ship so it can be moved, by digging the sand surrounding it away, and pulling the ship with tugboats.

If successful, they hope it could be afloat again by Sunday evening.

The stranded ship has caused a backlog of more than 300 ships either side who are trying to get past it.