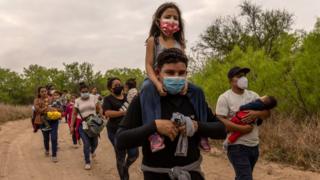 Getty Images
Thousands of people are trying to cross the US-Mexico border.

Thousands of people are being held at detention centres on the US-Mexico border.

Over the last few months there has been a big increase in the number of people trying to migrate to the US from countries in Central America.

This has meant that immigration detention centres at the border, where people wait until they can be legally processed, have become overwhelmed.

In particular the number of unaccompanied children at the centres - that means children travelling without their parents or guardians - has increased dramatically.

In a press conference at the White House, press secretary Jen Psaki agreed that the current situation at the US-Mexico border has become a "big problem".

In response to the situation, US President Joe Biden has announced that his Vice-President Kamala Harris will now be in charge of controlling migration at the southern border.

The migrant caravan: Life in the camp

What is the situation there? 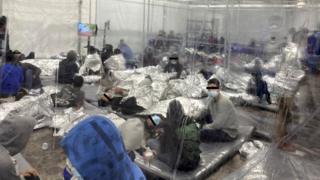 People have been migrating between the US and Central America for many years, however in the last few years this has increased.

In February, the US held more than 100,000 people at centres along the southern border, a 28% increase compared to January.

Between January and February this year, around 15,000 unaccompanied young people have been held at the border.

An 'asylum seeker' is a person who has applied to be let into a country because they say they're facing harassment due to their race, religion, nationality, political belief or membership of a particular social group.

Earlier this month the US Customs and Border Protection said that 4,200 children were being held in detention facilities along the border - with an average of 565 children aged between seven and 13 being taken in each day.

Some people are worried about the conditions the young people are being kept in at the centres, whether social distancing was taking place, and how long they were there for.

Pictures taken at a detention centre in Texas last week showed large groups of children cramped together in pop-up rooms, sleeping on thin mattresses on the floor under foil blankets. 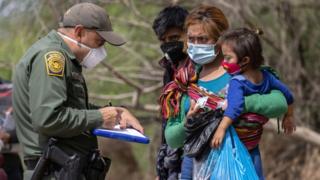 There are lots of different reasons why these people have left their homes, but it is believed that many are trying to escape violence and poverty in the countries where they live, in the hope of a better life elsewhere.

Immigration is a big topic in the US, and one that former president Donald Trump divided opinion on.

He wanted to build a wall along the US-Mexico border, to prevent people from entering the US illegally, and it was one of his big promises when he was campaigning to become US president in 2016.

During his presidency he introduced a "zero tolerance" policy which targeted people who were trying to get into America from Mexico illegally.

How do migrants enter the US?

Migrants can cross the US-Mexico border in one of two ways.

Legally: People who "have suffered persecution or fear that they will suffer persecution" in their home country are able to apply for asylum if they present themselves at an entry area on the border.

Illegally: Other people may try to enter the country by hiding in vehicles or travelling without being seen by border officials across unsafe parts of the border.

The policy was widely criticised all over the world, as it meant that thousands of children were separated from their families, and in June 2018 a US judge ordered that migrant children and their parents should be reunited.

Shortly after this Trump said that families could stay together, but that his "zero-tolerance" policy would stay in place.

Joe Biden was very critical of Trump's actions on immigration, and since becoming president, he has reversed this policy, instead choosing to place children with volunteer families in the US whilst they are processed.

However, it can take weeks or sometimes months to find a family to place the children with, meaning long wait-times in government custody. 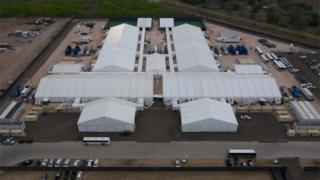 Reuters
A temporary tent facility in Texas is holding around 1,000 children

President Biden has also left a Trump emergency policy in place which allows US authorities to refuse entry to almost all undocumented migrants - with the exception of children.

People who are critical of Joe Biden's policies have said this decision may have contributed to the new rise in migrants travelling to the border, especially children, as they believe they will be given amnesty.

A spokesperson from Mr Biden's team has said they are currently working on a huge overhaul of the US immigration system, aiming to make big changes, such as processing and releasing migrant families within 72 hours.

What has the US President said he will do about it? 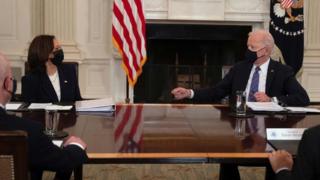 President Joe Biden has placed his Vice-President Kamala Harris in charge of controlling migration at the southern border.

Joe said he was giving her a "tough job" but that she was "the most qualified person to do it".

In response Kamala said: "Needless to say, the work will not be easy. But it is important work."

She also said that there was a need to "deal with the root causes" of immigration.

"Dealing with what we need to do around aid in a way that is about developing those countries so that we also deal with the cause of why people are coming into our country," she said.

Meaning she wants to understand the reasons why people are fleeing their home countries to head to the US, and whether the US can offer help to those countries to improve peoples lives there and reduce the number of people leaving.

Why is the US separating migrant children from their families?

US-Mexico border wall: Living with the wall - A Newsround special