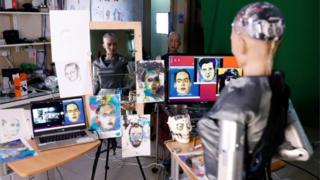 Reuters
Some of Sophia's other paintings also sold in the auction

The world-famous robot Sophia has sold some of her artwork at auction.

She worked together with digital artist Andrea Bonaceto to create the "Sophia Instantiation" - a 12-second video which shows Andrea's digital drawing of Sophia, turning into Sophia's physical painting of herself.

According to the auctioneer Sophia's painting was "based completely on decisions she made without any human assistance".

Speaking about her art she said: "I think this was a big success", "I am so happy that my works are so valued and appreciated."

What are NFTs and how do non-fungible tokens work?

This robot dog knows how you're feeling

Who is Sophia the robot? 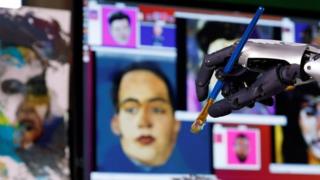 Reuters
Sophia painted on to a print-out of her portrait.

Sophia is a human-like robot created by Hanson Robotics and first activated in 2016.

She is able to have conversations and express emotions such as joy, confusion and sadness by using facial reactions.

This is down to something called Artificial Intelligence and deep-learning, which means she can learn new things and change how she does things in the future based on her past experiences.

Sophia has travelled the world, spoken to lots of celebrities, and even been granted nationality in Saudi Arabia, making her the first robot to have a nationality.