Suez Canal: How big are the mega-ships passing along it? 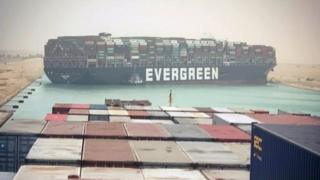 EPA
The massive vessel got stuck during high winds

The Ever Given mega-ship has blocked the Suez Canal in Egypt after it was hit by "a sudden strong wind".

That wind caused the ship's hull to hit the bottom of the canal and get stuck, blocking the path of other vessels which are trapped queuing in both directions.

The Suez Canal connects the Mediterranean to the Red Sea and is the shortest sea link between Asia and Europe.

It has been used to transport goods for over 100 years and today 12% of all global trade travels along its waters.

On board world's largest cargo ship 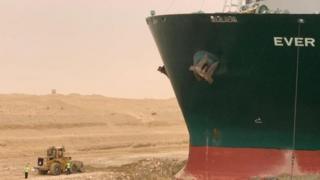 The Suez Canal Authority (SCA) said it was working to refloat the giant ship, using rescue and tug units. Its chairman, Admiral Osama Rabie, also said they had reopened an older section of the canal to ease the marine traffic caused by the incident.

Diggers are also working on the ground to try to free the ship, which is wedged into the side of the canal bank. The company that manages the container ship, Bernhard Schulte Shipmanagement (BSM), said: "all crew are safe", and there are no reports of injuries.

But just how big are the biggest container ships and how does something so massive float on water? Carry on reading for some mega facts about mega-ships! 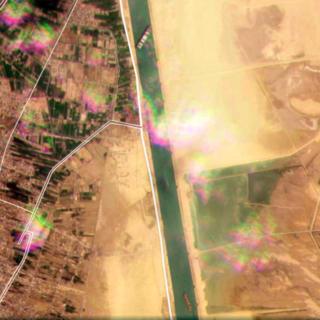 Mega-ships are some of the biggest moving objects ever made.

The ship that got stuck in Egypt, called the Ever Given, is a quarter of a mile long, or roughly the length of four football pitches, and is one of the largest container ships in the world.

Mega-ship engines weigh 2,300 tonnes, that's the weight of 328 African elephants, and there are 21 levels between the bridge and the engine room.

For now at least, it doesn't seem as if these huge ships will get any bigger, as they still need to fit through shipping canals and into ports around the world. 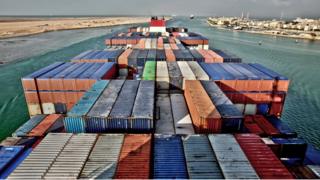 Science Photo Library
A container ship entering the Suez Canal in Egypt, with the city of Suez on the right

Mega-ships can carry up to 20,000 containers, each around six metres long.

If that number of containers was loaded onto a train it would need to be 70 miles long, roughly the distance between Liverpool and Leeds! And, if the containers were stacked up end-to-end, they would reach all the way into space. 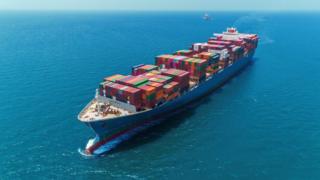 Giant container ships don't have a deck, so the containers you can see are just the tip of the cargo being carried across the ocean - there are several hundreds more below all stacked up in the belly of the ship.

So how can something that is essentially a giant floating bathtub be strong enough to cope with stormy seas?

Imagine a sandwich box with its lid on, it's pretty sturdy, but remove the lid (or the deck for the purposes of this example) and you can easily bend the sides.

The same applies to these big boats, so the ships have something called a torsion box added, which is a reinforced rim around the edge of the vessel to keep everything strong and sturdy.

In the massive container ships, the torsion box also doubles up as a corridor that the crew can use to walk around the boat. 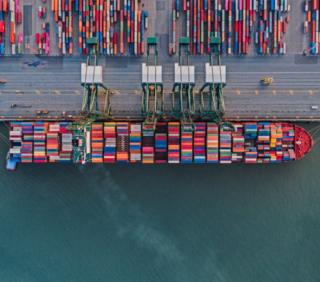 Container ships are very technologically advanced. A good example is the computer software that enables precise loading and unloading of containers and keeps the vessel balanced to stop it from tipping over.

Using something called the ballast, the weight of the boat can be shifted at the touch of a button.

Computer systems also mean that the boats can be crewed with as few as 13 people.

Meanwhile, the cranes that load and unload container ships are up to 430 feet tall, about as tall as The Great Pyramid of Giza, which is also in Egypt just like the marooned Ever Given. 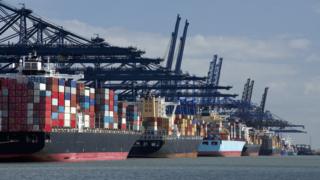 Several million containers are travelling across the ocean on large cargo boats at any given time and 90% of the world's goods are transported across water - that probably includes the device you're using to read this article.

The shipping industry is so big that, if added to the list of the world's most polluting countries, it would come inside the top six - producing more carbon emissions than most nations.

However because of the huge amounts of goods that the boats can transport, shipping is estimated to be several times more energy efficient than rail and road.