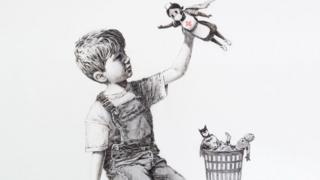 Banksy is hoping to raise up to £3million for the NHS by auctioning off a painting he did for Southampton General Hospital.

The painting called Game Changer appeared at the hospital during the first lockdown of the coronavirus pandemic.

The graffiti artist - who is famous for keeping his identity secret - is auctioning off the original canvas, with a copy of the painting to remain at the hospital.

The artwork shows a young boy kneeling and playing with superhero dolls. Batman and Spiderman are in a bin and the boy clutches onto a figure of a nurse with a mask on.

Find out some more about Banksy here:

Banksy does a 'Banksy' in his own bathroom!

When it was first unveiled, a note said: "Thanks for all you're doing. I hope this brightens the place up a bit, even if it's only black and white."

It's expected to be auctioned off for around £2.5million to £3.5million when it goes up for sale and proceeds will go to the NHS.

The image was originally hung in the hospital's foyer near the emergency department.

Christies, the company helping to sell the painting, described it as an "image of hope" and said it represents a "personal tribute to those who continue to turn the tide of the pandemic."

The auction will take place on 23 March. 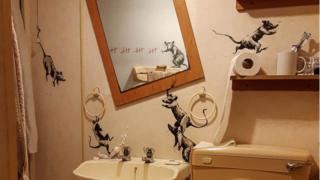 He began spray-painting trains and walls in his home city of Bristol in the early 1990s. Bristol is well known for its colourful street art and graffiti.

But in the 2000s, he expanded his work beyond Bristol and was soon leaving his artistic mark all over the world.

Why does no one know who Banksy is?

His identity is unknown, despite lots of people trying to guess who he is.

In 2008 the newspaper, The Mail on Sunday revealed who they thought he was.

But despite rumours about who he might be, Banksy's true identity has never been revealed.

Banksy: Artist starts spraying on his own house walls!