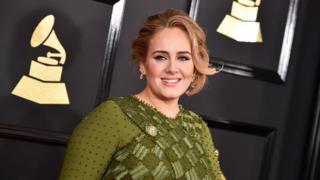 Adele has been named the UK's best-selling female album artist of the century!

The London-born superstar singer also holds the title for the fastest-selling album of all time, for her album 25.

The announcement was made by The British Phonographic Industry (BPI), the group that looks after the British music industry.

Some of Adele's musical influences also made the rankings - P!nk came second, followed by Madonna, Rihanna, Dido and Amy Winehouse in sixth.

Six times Adele has smashed it

1. Adele's album '25' became the fastest-selling album of all time, becoming the first album to sell more than three million copies in a week.

2. Her album '21' is the best-selling album by a female artist in the UK EVER! It sold just under six million copies.

3. 'Hello' became the first track to be downloaded more than one million times in a week in America. That pushed it straight to the top of the Billboard Hot 100 singles chart, which looks at music sales, streaming and radio play.

4. Adele managed to pick up an Oscar award in 2013 for her song 'Skyfall', which was the theme tune for the James Bond film.

6. In 2017 Adele made Grammy award history, by picking up six awards, equalling Beyoncé's record for the most Grammy's won by a female artist in one night. 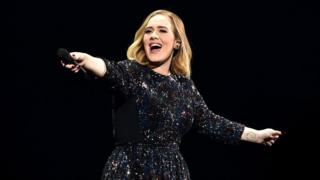 Adele was born in Tottenham, North London and around the age of 10 she moved to Brixton in South London, then West Norwood.

She burst onto the UK music scene in 2007 with her breakthrough song 'Hometown Glory', after attending the selective Brit School for Performing Arts & Technology in Croydon. 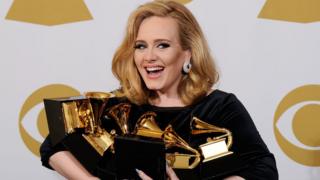 AFP/Getty
Adele made Grammy award history in 2017, by picking up six awards in one night
Is Adele going to release a new album?

Adele's three studio albums have been named after the ages she was when she wrote them - 19, 21 and 25 - and the she recently confirmed she is working on new material.

This will be her first new album for five years.

It is not yet known when it will be released, but in February, a video showed the singer performing at a friend's wedding, telling guests: "Expect my album in September."

Do you love Adele? Get in touch and tell us why below...

How do you listen to music?