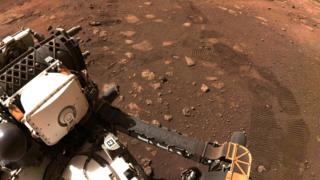 Perseverance has begun its Martian journey and started exploring the Red Planet.

During its first drive, the US space agency's rover wiggled forward a little, spun on the spot 150 degrees, and then reversed slightly.

The one-tonne robot then captured a picture of its own tracks on Mars' surface.

It only travelled 6.5m (21ft) in total, which might not seem like very far, but getting to this point has taken years of planning.

"While the rover is still doing a lot of engineering checkouts, the minute the rover begins to move we can consider ourselves explorers on the surface of Mars," she told the BBC.

"You can see the wheel tracks that we left on Mars; I don't think I've ever been happier to see wheel tracks," said Perseverance mobility engineer Anais Zarifian.

"This is just a huge milestone for the mission and the mobility team. We've driven on Earth but driving on Mars - that's the ultimate goal, and just so many people have worked towards this very moment for years." 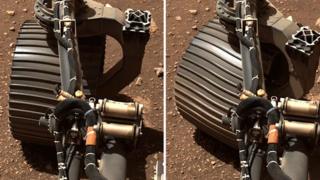 NASA/JPL-CALTECH
Perseverance has got tough wheels, ready to take on the rocky surface on the Red Planet
When did Perseverance arrive on Mars?

Touchdown was confirmed in February, when Nasa successfully landed its Perseverance rover in a deep crater near the planet's equator called Jezero.

The six-wheeled robot landed after a 470 million-km (292 million-mile) journey from Earth.

It is the first time a science mission has gone to Mars with such an advanced set of equipment.

Soon after, Perseverance beamed back amazing new images of itself landing. 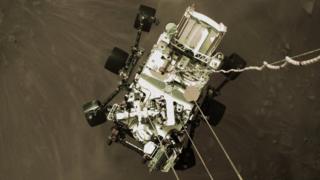 The name Perseverance was chosen by Alexander Mather, a 13-year-old student from Virginia in the US, who took part in Nasa's competition to name the robot.

The ancient rivers found on Mars

What are Nasa hoping to achieve?

Over the coming Martian year (roughly two Earth years) Perseverance will move towards the rim of the crater in Jezero, to search for evidence of past life.

This will involve roving 15km.

This is where scientists believe they'll have the best chance of finding evidence of ancient water and biological activity.

Perseverance's most interesting rock finds will be packaged into small tubes to be left on the surface. 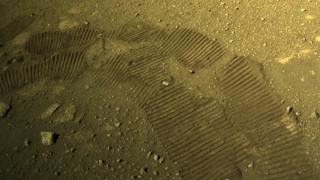 NASA/JPL-CALTECH
Keeping roving, Perseverance. We are excited to see what you find!

Nasa and the European Space Agency (Esa) then hope to send a second rover in a multi-billion dollar mission to collect these cylinders towards the end of the decade.

Scientists think that returning physical samples from Mars is the next logical step in exploration of Mars.

Physically having the rocks will help Nasa because it'll be able to use more sophisticated technology to analyse whether there has been life on the planet.