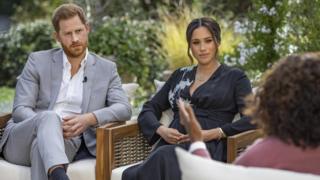 The Duke and Duchess of Sussex have recorded an interview with famous American talk show host, Oprah Winfrey describing their relationship with the Royal Family.

In the interview with Oprah, the Duchess has made a serious claim about life in the Royal Family, she said that the palace has "perpetuated falsehoods" about the couple.

So far there has not been a response from the Royal Family to Meghan's claim.

Last year the couple decided to step down from royal duties - something that was finalised by the Queen in February.

Harry and Meghan, who now live in America, have previously spoken about the pressures they faced as royals and the impact it had on their mental health.

More about Harry and Meghan:

Harry and Meghan will not return to the Royal Family

So what's been said in the interview? 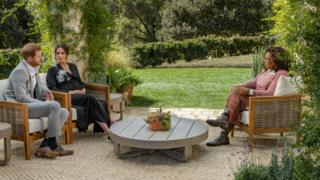 The interview will be shown on TV in the US on Sunday 7 March before being aired in the UK the day after, but clips of the interview have been shown already.

In one 30-second clip the duchess says she is not afraid of the consequences of speaking out, before adding that "a lot has been lost already".

Oprah asks Meghan: "How do you feel about the Palace hearing you speak your truth today?"

Meghan replies saying that the Palace has taken an "active role" in allowing untrue things to be said about the couple and that they shouldn't be expected to "be silent".

CBS, the American TV network running the interview has said Meghan will be interviewed about "stepping into life as a royal, marriage, motherhood" and "how she is handling life under intense public pressure".

She will then be joined by Prince Harry, and the couple will speak about their move to the US last year and their future plans. 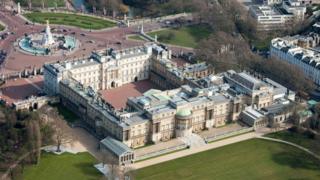 CBS shared the clip of Meghan after Buckingham Palace said it had started an investigation into claims the duchess had bullied former members of royal staff.

A leaked email published by the Times newspaper and sent from a staff member, claims Meghan forced two personal assistants out of Kensington Palace where she and Harry were living in 2018.

In a statement, Buckingham Palace - which is responsible for the hiring of royal staff - said it was "clearly very concerned about allegations in the Times" and would look into the claims made in the article.

"The Royal Household does not and will not tolerate bullying or harassment in the workplace," said the statement. 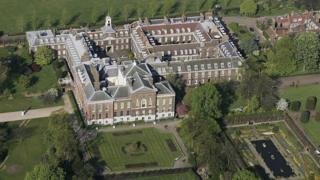 The bullying allegations are denied by Harry and Meghan.

A statement issued by Meghan's spokesman in response to the newspaper's story said: "The duchess is saddened by this latest attack on her character, particularly as someone who has been the target of bullying herself and is deeply committed to supporting those who have experienced pain and trauma.

"She is determined to continue her work building compassion around the world and will keep striving to set an example for doing what is right and doing what is good."

How did we get to this point? 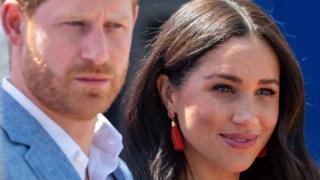 In an ITV documentary filmed just months after Meghan had given birth to her first child, Archie, in 2019, the duchess said that "not many people have asked if I'm OK".

Asked if she could cope, she said she had told Harry it was not enough to just survive - "that's not the point of life - you have got to thrive".

At the start of 2020, the couple announced on their Instagram that they would be stepping back as 'senior' members of the Royal Family.

The announcement was made before other members of the Royal Family had approved the move.

Prince Harry has said that the decision was made to protect himself and his family from the press.

In another clip from the interview with Oprah, the Duke of Sussex compared the treatment of his mother, Diana, Princess of Wales, and Meghan.

Princess Diana also spoke about how hard it was to join the Royal Family. She was often written about in newspapers and stories about her made headlines around the world.

In 1997 while in Paris, Princess Diana died when the car she was travelling in crashed after being chased by photographers known as paparazzi. Prince Harry was 12 at the time.

Prince Harry has said he's seen "history repeating itself" and "I lost my mother and now I watch my wife falling victim to the same powerful forces." 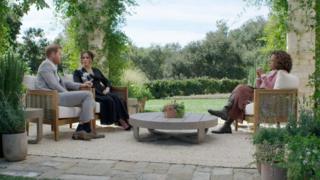 Some of the negative stories reported in the newspapers about Meghan have also been accused of showing racist feelings towards her.

But now it's not just the British press that Harry and Meghan are criticising, but the role the Royal Family has had in protecting them.

What's been the reaction?

Problems within the Royal Family are rarely revealed or spoken about in public, so Harry and Meghan's interview and the claims of bullying against the duchess are all quite unusual.

BBC Royal Correspondent Jonny Dymond says: "If anyone thought Prince Harry and Meghan were going to restrict their criticism to the British media, they should think again. The Royal Family and its staff - is clearly in their sights."

Victoria Murphy, a long-time royal correspondent said "I've covered the royals for a decade and I can't remember a time when we've seen such open hostility."

Prince Harry and Meghan: Baby news for Duke and Duchess of Sussex

169 comments
Back to top
unknown