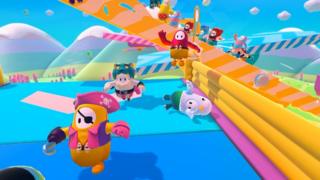 The video game company that makes Fall Guys has been bought by Epic Games which also owns Fortnite and Rocket League.

The company called Mediatonic has called the move a "huge win for Fall Guys", and said that that joining Epic "will accelerate our plans to improve the game and bring Fall Guys to as many players as possible."

Fall Guys was released last year and quickly became really popular, with millions of players downloading the game where colourful 'jellybean' avatars have to find a way through virtual obstacle courses.

Fall Guys will still be available on Steam and the PlayStation Store and Mediatonic says that despite the takeover it will "continue to be the same team, working on the same game".

And plans for the game to come out for the Switch and Xbox this summer will still go ahead. 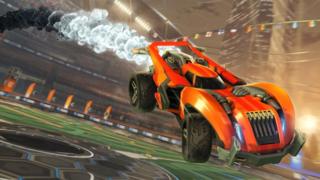 It also means that some of the features seen in Fortnite and Rocket League could come to Fall Guys in the future, including cross-play, and squad vs. squad modes.

When Epic bought Rocket League in 2019 it turned it into a free game with added customisation which could be bought while playing.

But there was "nothing to announce right now" about whether the game would move to a free-to-play model, but the developer promised to "stay super close" to the Fall Guys community.

"[We'll] continue to chat with you in the same open and honest way, and continue to take on all of your suggestions and feedback," the company said.

Fall Guys' already uses a similar "Battle Pass" system to Fortnite, which means players can buy rewards and additional content that can be unlocked. 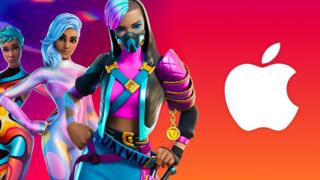 "I expect Epic Games to handle Fall Guys in the same way as Rocket League: get the game on major platforms, enable cross-play and when its sales reach the 'ceiling'... ultimately go free-to-play in order to maximise its audience," said George Jijiashvili, a games analyst at media company, Omdia.

However, Epic Games' ongoing legal battle with Apple might hurt the game's chances of appearing on mobile devices.

"It's unclear if Mediatonic had plans of releasing a mobile version of Fall Guys outside of China, but if they did, the Epic Games acquisition is bound to complicate the matters," Jijiashvili said.

Apple and Google removed Fortnite from their app stores last year after players were able to make in-game purchases on the mobile version of the game with neither Apple or Google able to take a percentage of the profits. 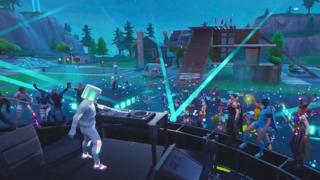 Epic Games
Fortnite has held music concerts in-game, especially during lockdowns when music venues across the world have been closed

Mediatonic was created by two students at Brunel University in London 15 years ago.

One of the former students, Dave Bailey, said "with Epic, we feel like we have found a home that was made for us. They share our mission to build and support games that have a positive impact, empower others and stand the test of time".

Epic Games' founder and chief Tim Sweeney said: "It's no secret that Epic is invested in building the Metaverse, and Tonic Games shares this goal."

In science fiction, the Metaverse is the idea of a virtual reality beyond our own, a shared digital space that is bigger than any one game.

Fortnite's recent live concerts and media events in-game are sometimes seen as a step in the direction toward a huge virtual world.

Let us know in the comments if Epic Games buying Fall Guy's is good news in your opinion.