National Robotarium to open in Edinburgh in 2022 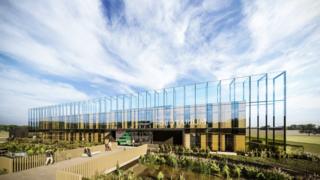 Heriot-Watt University
Check out this artist impression of the National Robotarium. This is going to be one cool building!

Robot pets, underwater robots, robots with feelings that behave on their own...

They might sound like characters from a science fiction film, but these robots are being developed right now and there are LOADS more on the way!

That's because the UK is about to start building the National Robotarium in Edinburgh.

The £22.4 million facility will open in Spring 2022 and will be the largest and most advanced research facility for robotics and artificial intelligence (AI) in the UK.

What will the National Robotarium include? 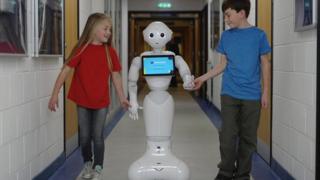 Ever wanted to make robots for a living? Well, the National Robotarium is hoping you do!

As well as designing the technology for brand new robots, the centre wants to encourage children from all backgrounds to consider a career in robotics.

The facility wants to engage tens of thousands of children over the coming years in its research and there will be a dedicated education hub inside the building for schools to visit. 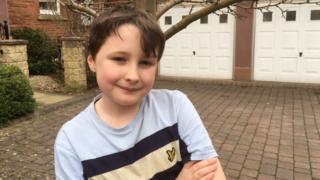 Ben, 11, from Edinburgh, said: "It's so exciting that these robots will be so close to my house in Edinburgh. I am looking forward to visiting the new centre when it opens.

"I think it is a good idea for people my age to think about working in robotics. It can expand your mind, and help you learn new skills like programming and software. By using skills like this you can change the world for the better and I think that is really exciting." 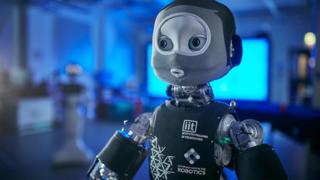 Heriot-Watt University
This human-like robot is called the iCub.

The centre is funded as part of the Edinburgh and South East Scotland City Region Deal and is a collaboration between Heriot-Watt University and the University of Edinburgh.

It will bring together academics and global companies to design new products and technology that will eventually help us in our homes and offices. 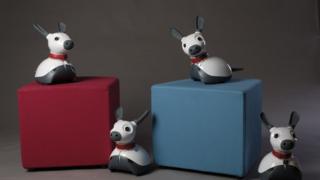 Edinburgh Centre for Robotics
Say hello to the MiRos. These robot dogs learn from their environment and behave autonomously (which means independently). They are currently being taught to learn as a team

Professor Helen Hastie, who is one of the academic leads of the new facility, said it will be "world-leading" and will "play a significant role in supporting the UK's economic recovery from the Covid-19 pandemic."

She went on to say that "the National Robotarium will form a centre of excellence for fundamental research and knowledge exchange to address real-world challenges " and will pave "the way for the UK to take a leadership role in AI and robotics technology."

Professor Yvan Petillot is also an academic lead on the project. He said: "We hope to inspire [the next] generations about the positive impact of robotics and artificial intelligence, building trust, ethics and understanding into our research."

Developing robots we can trust 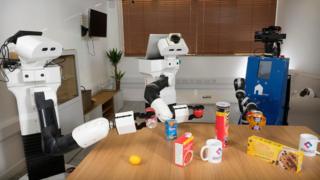 Heriot-Watt University
Robots from the Assisted Living Lab. Imagine having one of these in your house one day!

In November 2020 it was announced that the National Robotarium will research ways to manage trust between humans and autonomous systems in situations where humans and robots need to interact, such as in self-driving cars or autonomous wheelchairs.

Amongst the specialist equipment will be laser labs, an autonomous systems laboratory, and a living lab for trialling technology in a realistic home setting.

The building will also include a 'partner suite' dedicated to industry, academic and government collaboration. 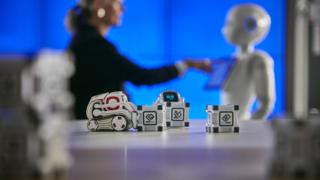 Heriot-Watt University
This is the Cozmo robot. It's autonomous and has emotions! How amazing is that?!

The National Robotarium will be home to lots of research projects aimed at addressing a wide range of global challenges.

Examples of projects include developing the world's first multi-user conversational robot for healthcare, intended to support the care of elderly patients.

The building's assisted living lab will use technology to help individuals live independently for longer, with research ranging from robotics and conversational assistants to wireless monitoring techniques. 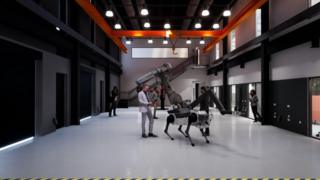 The huge building will also focus on sustainability.

In the winter it will use heat from the Sun to warm the building and recycle warm air.

There will be solar panels on the roof, sustainable urban drainage systems and charging spaces for electric cars.

David Cairns, managing director of Robertson Construction - the company building The National Robotarium, said the "building is designed to be as innovative as the research taking place within its walls. The commitment to sustainability and the wellbeing of its staff and students mean the facility will be equipped with state-of-the-art technology for energy efficiency and production and will boast considerable green space.

"The building will be certified to 'Fitwel' standards, meaning its design meets strict criteria for supporting occupants' health, wellbeing and productivity."

What do you think about robots? Would you like to work in robotics in the future? Let us know in the comments below.