Live stream of wildlife could help protect animals from poachers 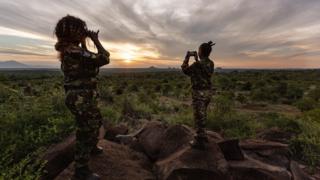 A group of women who work in South Africa protecting wildlife are using phone and video technology in the fight against poaching.

The Black Mambas Anti-Poaching Unit is based in Balule Nature Reserve, part of the Greater Kruger Area in South Africa.

They patrol the area to protect animals like elephants and rhino who are threatened because of poachers wanting to kill them for their tusks and horns.

The group is live streaming their patrols for two months from 3 March and asking for virtual rangers to tell them if they see anything suspicious. 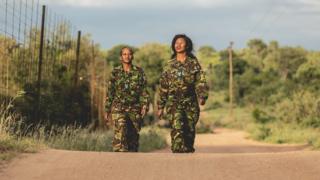 The rangers have been given new phones by tech company Samsung to enable them stream the video for Wildlife Watch and take pictures of the animals and any poachers they see on their night time patrols.

Who are the Black Mambas?

The female Anti-Poaching Group was set up in 2013.

The team do a dangerous job, they look after animals like lions in the reserve and face violence from poachers.

They protect the animals through patrols and surveillance but also educate people in the community to show them that conservation is better than poaching.

Their Bush Babies Educational Programme teaches school children all about the animals and environment and why they should be protected.

Leitah Mkhabela faced criticism when she joined the Black Mambas as people told her it was a job for men but she wants to help protect animals like rhinos so that future generations can see them.

She thinks the live stream will be a big help, she said: "Since this virus people are not able to come in and see the animals but we can use the cameras to remind them that the animals are still there and they need you to watch out for them.

"I would send a message to the whole world that the Black Mambas can't do it by themselves, we need more people, we need more eyes." 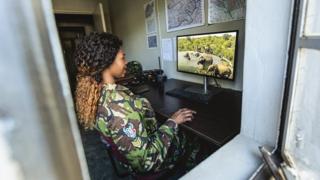 Samsumg
Leitah can keep an eye on the animals through cameras set up in the park.
Important reserve

The Kruger National Park is a really important place for rhino, around 30 percent of the world's rhino population live there.

Unfortunately it is also a really bad place for poaching, two thirds of the rhino population was lost to poaching in between 1999 and 2019.

The coronavirus pandemic has had a huge impact on tourism to the area as far fewer people have been able to travel because of restrictions.

This has meant a loss of income for the reserve. 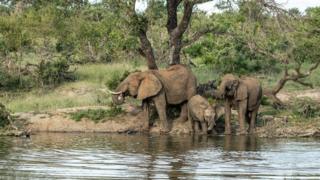 By live streaming their patrols the Black Mambas say it will enable people to see the animals despite restrictions.

They hope that by people getting in touch with things they see on the live stream they will be alerted to problems more quickly.

The group also hopes it will raise awareness of the conservation work they are doing and encourage people to give money to support their work protecting animals.

Is enough being done to stop the poaching of wild animals?

Giraffes to be better protected from poachers