England meteor: How do you find a meteorite?

It started with a flash and a bright light - now there's a search for a precious piece of space rock that landed somewhere in southern England.

Scientists say a meteor that lit up skies across Britain on Sunday night was probably a small piece of an asteroid entering and burning up in the Earth's atmosphere.

The UK Fireball Alliance (UKFall) which looks for freshly-fallen meteorites says that although the meteor broke apart in the atmosphere, it is likely that "a few fragments" hit the ground.

Meteor filmed shooting across the sky on doorbell cameras

Car-sized asteroid has near-miss with Earth!

The space rock is thought to have landed in the Gloucestershire area just north of Cheltenham and somewhere between Swindon Village and Bourton-on-the-Hill.

"We can track the fireball really well, but the 'black magic' starts when it goes dark - when the light goes out and it still has another 10-20km to reach the ground," explained Dr Ashley King from UKFall and London's Natural History Museum."

"Strong winds can blow the object off course of where you think it's going to land, and that's what we're working on now. But, yes, somewhere north of Cheltenham," he told BBC News.

People living in these areas are being asked to contact the UK Meteor Network or National History Museum if they find any bits of rock they believe are meteorites.

Meteorites are often dark, shiny pieces of rock and in this case will be smaller than an orange.

Experts are also warning people not to travel to the area to find fragments due to the lockdown restrictions. 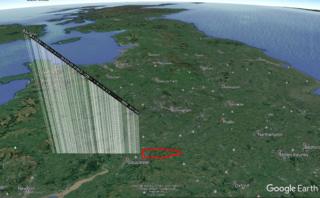 Dr Katherine Joy, from the University of Manchester, said: "If you do find a meteorite on the ground, ideally photograph it in place, note the location using your phone GPS, don't touch it with a magnet, and, if you can, avoid touching it with your hands."

Although a meteorites burn through the atmosphere, smaller pieces are cool when they hit the ground and aren't dangerous to touch. However, oils from your skin will slowly degrade the surface of a meteorite and can contaminate it when scientists try to study it.

Using a magnet on a meteorite is even worse!

"We've learned over the years that most meteorites carry a kind of magnetic record within them from when they were in space," says Dr King.

"We can actually study that and learn about where these things came from and how they formed. But if you put a magnet on the object, we lose all of that information." 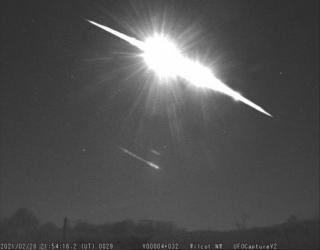 The fireball produced a sonic boom as it hurtled across the sky. A sonic boom is when shock waves are created by an object that is travelling through the air faster than the speed of sound, which is 767mph.

February's meteor could break the world record as the most reported ever - with more than 1000 reports on the International Meteor Organisation's website so far.

Some evidence from camera data has already suggested the rock came from the outer asteroid belt, which is between Mars and Jupiter. In the asteroid belt - which orbits around our sun - pieces of space rock bump into each other and bounce off into space.