Climate change: How can sea slugs help us understand it? 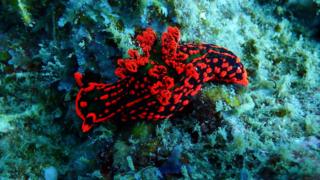 Sea slugs in the waters around Australia are helping scientists to better understand the impact of climate change.

Researchers are using a sea slug census - which looks at numbers of different types of sea slug and the location of the colourful creatures.

Marine scientist Professor Steve Smith helped establish the first census in 2013 and says sea slugs are perfect for monitoring the environment: "Sea slugs have a very short life span, usually less than a year, so it means they are going to respond very quickly to changing environmental conditions — particularly if their food disappears."

The study has recorded more than 630 species and found that many of them have moved location.

"Some of these are 2,500 kilometres further south than they've been recorded before."

Why not try our sea slug quiz to find out more about these creatures? 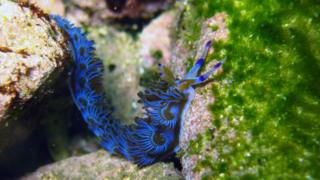 Professor Smith added that there were a number of possible causes.

"One of the things forecast to happen under climate change is the increasing strength and frequency of the East Australian Current."

The East Australian Current (EAC) is a flow of warm water, which in recent years, has started flowing further south.

(If you've seen the movie Finding Nemo, The East Australian Current is where Marlin and Dory travel with sea turtles on their way to find Nemo.)

Why are so many sea creatures leaving their homes?

Why lockdown is great news for sea turtles

Quiz: Can you spot these sneaky sea creatures?

The EAC gets faster and stronger during the summer when there are warmer temperatures. But as the air becomes hotter as a result of climate change, the South Pacific winds are getting stronger, for longer, and marine life from all along Australia's coastline are finding themselves dragged in the EAC further south.

"So it means potentially we have this conveyer belt of tropical species which is going to come into our coastal waters more frequently," Prof Smith says.

"At the same time we are getting increased temperature, which means species that might have a tolerance for warmer temperatures can exist in this area for longer."

The long term impact of the EAC moving further south could see an increase in strong storms in the area of southern Australia, which could also disturb smaller marine life below the ocean's surface.

If you can't see this quiz, try here.

Calvapilosa: The spiky slug with hundreds of teeth

Finding Dory: Worries that film could cause fish decline