Cladding crisis: What is it and how is it affecting kids? 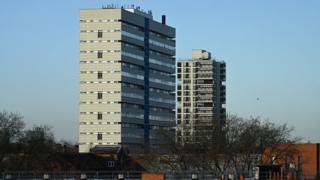 For more than three years, the cladding crisis has been affecting thousands of families.

Across the UK, some kids are living in homes that have been classed as unsafe. There are families who are unable to move and are facing huge bills to fix cladding issues.

"You're supposed to feel safe [at home]" says 10-year-old Dexter, who lives in a one-bedroom flat with his parents.

So how did we get here and whose responsibility is it to solve the problem?

What is cladding and why is it a problem?

Cladding is a bit like adding a layer of skin to the outside of a building. It can protect it from the weather, or just improve how it looks.

It is a material that has been commonly used by builders when making apartment blocks and high rises.

In some flats, it has also been installed inside to help insulate them and keep them warm.

But, some cladding has been found to be highly flammable - meaning it can catch fire easily and burn very quickly.

The full extent of the danger was made clear almost four years ago after a massive fire at a large block of flats in West London.

What happened at Grenfell Tower?

It took firefighters 24 hours to get it under control, after the fire spread rapidly from where it started, on the fourth floor.

Seventy-two people lost their lives and more were injured. 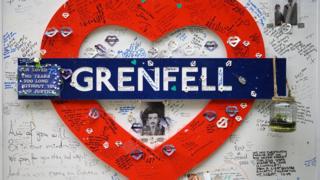 Getty Images
Here, tributes are paid to the victims of Grenfell Tower

Experts described the fire as "unprecedented", which means that nothing like it had ever happened before.

A special investigation found that the cladding installed at Grenfell fuelled the fire and channelled the flames further up the tower.

Recently, it was also uncovered that fire tests carried out as early as 2014 showed the cladding used on Grenfell Tower failed to meet the necessary safety standards.

Upset by the news

How is cladding affecting kids now?

The Grenfell fire led to a UK-wide investigation to find any buildings with similar cladding to that used on Grenfell Tower.

Many more people have since found out that their homes have been built with similar materials, or have other safety issues.

This means that those who own their flats, also known as leaseholders, are faced with paying thousands and thousands of pounds to make them safe.

And, it is not just the cost of removing the cladding, families are also paying huge amounts to insure their properties and install fire safety equipment. 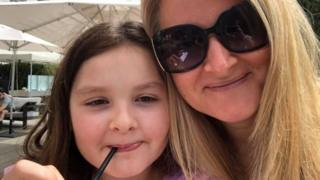 Newsround spoke to Mariana who said she is worried about the situation.

The nine-year-old said: "I don't feel safe and I feel like, if there is a tiny fire, it's all going to [the building] catch fire really, really quickly.

"The people who lied about the cladding and said it was safe, should be the ones to pay for it and make it safe."

Her mum Lucy told us that lots of other families are struggling too.

She said: "The safety aspect is huge, but what it means is if your flat has flammable cladding or any of the other related safety defects, the bank say that it's automatically worth zero.

"That means that you can't sell it at all - so for a lot of families it becomes very difficult because they can't move to be closer to loved ones. Sometimes there's new babies in the family, and they need more space and they can't move."

While flats remain cladded with unsafe materials, they are considered worthless - owners cannot sell them and many others say they feel trapped too. 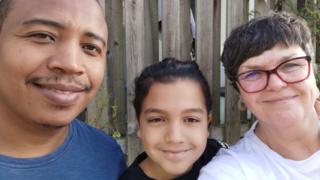 Dexter is one of the children unable to move.

He told Newsround: "I feel terrible because we're not going to be able to move and we're going to be carrying on living in this one-bedroom flat... there's just not enough space."

Dexter loves football and he and his family wanted to move to be near an academy, and nearer to the high school he wanted to join.

His mum Michelle said: "Until all of this is sorted out we're in limbo... we can't sell our property, we can't move, so we have no control over what goes on."

How are buildings going to be made safe?

Cladding is already being removed from some buildings.

In others, around-the-clock 'waking watch' patrols are in place - this means that there is always somebody whose job it is to raise the alarm in the event of a fire. 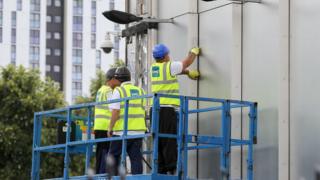 Additional fire safety has also been added to some homes, like fire alarm and sprinkler systems.

But these have all come at a huge cost. Some of this has been covered by the Building Safety Fund - a fund set up by the government after the Grenfell Tower tragedy - but many residents have had to pay for these safety measures themselves at a cost of tens of thousands of pounds.

What have the government done about it?

After years of campaigning by flat owners, the government recently promised to give a total of £5 billion in funding to replace unsafe cladding in England.

They say this is the "largest ever Government investment" in building safety.

The Community Secretary Robert Jenrick said leaseholders in buildings over 18 metres high, or with six stories, will face no costs for cladding works.

But added that lower rise blocks of flats, between 11 and 18 metres, were a "significantly lower" risk, though where cladding needed to be removed he announced a long-term scheme to protect leaseholders - where no leaseholder will pay more than £50 a month for the removal of unsafe cladding.

The minister said: "Our unprecedented intervention means the hundreds of thousands of leaseholders who live in higher-rise buildings will now pay nothing towards the cost of removing unsafe cladding.

"Our landmark intervention will make homes safer and free those who did the right thing - saving for years to get on the property ladder - to enjoy the homes in which they have invested so much." He added.

Many home owners are now waiting to find out if they qualify for the fund and are hoping to move forward with their lives.

But some people have argued that this is not good enough, and a report by MPs has said that the real cost is nearer £15bn.

And it is not yet clear if any help will be given to cover the high insurance costs and all the other safety fees owners are having to pay.

Mariana's mum Lucy told Newsround that she was really disappointed with the offer and was not sure if their home would qualify.

She said: "It only helps people in buildings over 18 meters. It only affects the specific cladding costs, so all of the other very expensive fire safety measures that are in the majority of buildings, it doesn't cover it all.

"So if you're in a building under 18 meters you're having loans forced on you to pay for the cladding and then the rest, you need to pay for upfront yourself, so it's kind of like sticking plaster on a very, very big problem. 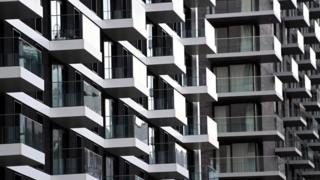 Dexter and his family hope the fund can help them move soon.

"We are not responsible, we're the ones who were told it was safe, so we assumed that it was going to be safe and and we should not pay for this.

"I think it's too little, too late... they're only starting to put some effort into it now and it's just taken I think too long.

"I want the government, to not just make promises, but to actually get the money down and to get it done as quickly as possible."

Two years on from the Grenfell Tower fire - what has happened?

103 comments
Back to top
unknown