Back to school: Primaries in Wales could reopen fully from 15 March 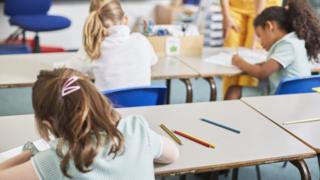 Primary schools for children aged eight and over could reopen fully in Wales by 15 March - if Covid cases in the country continue to fall.

Children aged between three and seven - those in the foundation phase - are returning to school from Monday.

Wales' First Minister Mark Drakeford announced his plans for easing Wales out of lockdown and getting more children back to school.

He hopes this will be the last three weeks of the "stay-at-home" rules but any lockdown change depends on case rates falling.

More on schools and covid here

Schools in Scotland to begin gradual return from Monday

When are UK schools hoping to reopen?

Schools across UK closed to most pupils 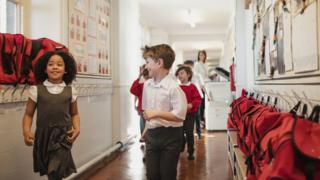 Getty Images
Are you going to be one of the children returning in March?

The Welsh Government said that people still need to stick to current restrictions to ensure a safe return to school.

The next review will look at all primary pupils, and some older students, returning to schools and colleges from 15 March.

That includes years 11 and 13, and students doing similar qualifications in college, returning in a "safe and flexible way", Education Minister Kirsty Williams said.

She added there could be some "flexibility" for years 12 and year 10, who have been entered for qualifications.

Mr Drakeford told BBC Radio Wales: "If in three weeks' time the numbers are still falling, the positivity rate is falling, the R number's below one, hospital pressures continue to reduce, then I hope we'll be able to move beyond 'stay at home'."

He said it was "too uncertain" to say how far restrictions on movement might be eased, but he suggested a "stay local" arrangement, similar to local lockdowns which were imposed in the autumn, was a possibility.

Talks will begin with non-essential shops, such as hairdressers, about the prospects of reopening. But Mr Drakeford warned there would not be a "wholesale" reopening of shops.

The announcement is the latest review of the coronavirus lockdown imposed in Wales before Christmas.

What is changing after Friday's review?

What is happening elsewhere in the UK? 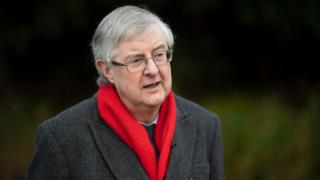 Wales' decision on when schools can reopen is different to England, Scotland and Northern Ireland.

This is because each country is in control of its own coronavirus restrictions.

In England, Prime Minister Boris Johnson has said he will announce a plan for the easing of lockdown on 22 February.

This will include the dates schools can reopen to all children.

He has confirmed that any return to the schools won't happen until at least 8 March.

He has also promised schools would get a two-week warning to prepare for students going back so teachers and parents can get ready.

Pupils in Scotland are starting a gradual return to school from Monday.

Coronavirus: Schools in Wales to stay closed for longer

80 comments
Back to top
unknown