Research suggests some Pacific islands are getting bigger

Researchers have discovered that hundreds of islands appear to be growing in the Pacific Ocean, despite the threat of rising sea levels.

Scientists from the University of Auckland found that some islands have grown as much as 8% in size over the last 70 years. They used satellite images and data gathered on site to discover the changes.

The researchers believe this evidence could help low-lying islands in the Pacific and Indian Ocean adapt to global warming in the future.

How can an island grow? 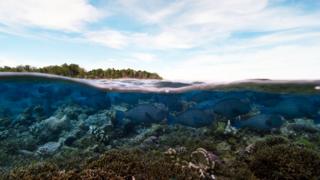 Blue Planet II, BBC
Bumphead parrotfish feeding on coral and algae. These parrotfish use their large forehead to ram corals, breaking them into pieces that are easier to eat. Once digested, the fish 'poop out sand', which is how beaches and land is created!

Dr Murray Ford is a coastal geomorphologist, he looks at how land is formed and what shapes it.

He said coral reef sediment is responsible for the island growth: "Everyone's seen pictures of lush coral reefs, and those corals lay down a skeleton...and that skeleton is able to be broken down by waves and different fish that will chew up the coral and poop out sand - and that's the foundation for forming an island." 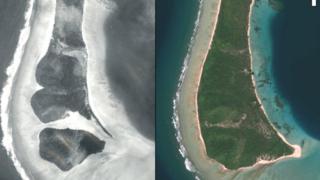 Over several years, Dr Ford and his team have been able to revisit some of these islands and record the changes that have been made by the processes at work in the region.

Aerial images gathered by satellites since World War Two show how much of the shoreline of one such island, Jeh, has evolved. It shows clearly how the land mass has changed in that time, and where areas that were once reef are now land that you can stand on.

To be standing somewhere that 70 years ago was a reef - and is now an island - is pretty mind-blowing.

The important thing to understand, says Dr Ford, is that coral reefs need to be healthy for islands to grow.

If reef ecosystems are dead, they are not reproducing coral, which is no good for the animals that use the reef as a place to live or for the formation of islands.

"Some coral species can grow really quickly. Obviously new growth can fall off and be chomped up by fish and broken down by waves, but provided the reef stays healthy it's always going to be generating sand."

The protection these habitats provide for wildlife is hugely important, and the health of a reef is vital for ecosystems and the animals that live there to thrive.

What does this mean for the future?

"The problem is we don't know how long a reef is going to be healthy for. We have problems with coral bleaching, where you see coral turn white and basically die, and with the changes in ocean temperatures and the sea turning more acidic... we just don't know," Dr Ford added. 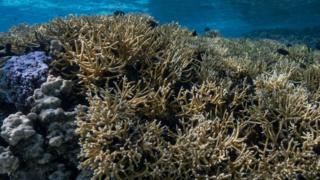 Alexis Rosenfeld
A view of major bleaching on the coral reefs of the Society Islands in Moorea, French Polynesia

"We have to reduce our CO2 emissions and keep a lid on (global) warming. That's a global effort and something we can all do."

The research team was keen to point out that even though the evidence suggests some islands are able to grow, that doesn't mean we should stop worrying about rising seas levels, where many low-lying islands and communities are at risk.

In areas where coral reefs were healthy, enough sediment is being produced for islands to grow.

But in places where coastal erosion from rising sea levels is threatening other Pacific islands, or where reefs are dying, that is not the case.

A better understanding of which islands are growing and which are eroding could help Pacific nations adapt to climate change and the message from the research team is that one site will differ to that of another. 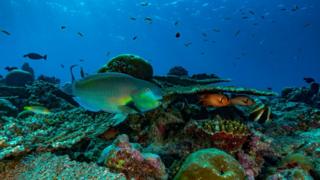 Until then experts say it is important for all of us to recognise the processes that are causing both the growth and destruction of these ecosystems, and what we can do to protect them for the future.

Not just for the benefit of growing islands or the protection reefs provide from coastal erosion but more importantly, for the marine wildlife that relies on the coral reef for its home.

Coral Bleaching: What is it, how does it happen and how bad is it?

Fiji: On the Climate Change Frontline

Scientists trying to save coral reefs in Maldives