This newly discovered galaxy is a space mystery! 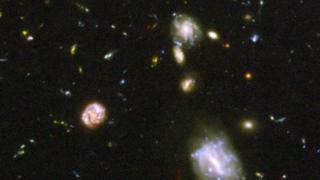 Cardiff University
The ALESS 073.1-galaxy is challenging our understanding about how galaxies form

Are you ready to have your mind blown by a space mystery that even scientists can't answer?! Strap in for this one, we're going on a journey to a galaxy far, far away...

The newly discovered ALESS 073.1 galaxy is leaving astronomers scratching their heads as it "defies understanding" of how galaxies are formed.

It dates back to the early years of the universe whilst also appearing to be billions of years too old for that.

Confused?! You're not the only ones! Read on to find out more.

Search starts for astronauts of the future

What is a galaxy? 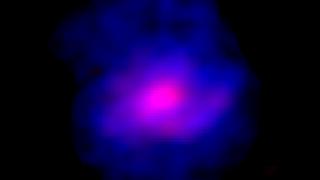 Cardiff University
A direct image of the ALESS 073.1 galaxy

The galaxy formed just 1.2 billion years after the Big Bang occurred 13.7 billion years ago, but because it is VERY far away from Earth, the light that is reaching us now is showing us what it looked like billions of years ago.

Dr Federico Lelli, lead author of the study from Cardiff University's School of Physics and Astronomy, has been trying to solve the mystery. He said: "We discovered that a massive bulge, a regular rotating disk, and possibly spiral arms were already in place in this galaxy when the universe was just 10% of its current age."

Before this discovery, scientists previously believed that a key feature of old galaxies was the bulge in their centre where stars became tightly packed due to gravity. They thought that this formed slowly by the merging of smaller galaxies or processes taking place within the galaxy.

But the ALESS 073.1 has completely disproved this theory by demonstrating that the bulge can be formed quickly.

This galaxy looks like a grown adult, but it should be just a little child

And that's not the only thing that left the astronomers baffled. The new galaxy has similar features to some mature galaxies, like our own Milky Way.

The Milky Way has a distinct spiral shape, made up of arms that extend from the centre. The ALESS 073.1 galaxy unexpectedly has a similar shape.

Scientists were surprised by this as early galaxies are believed to be chaotic and unstable, instead of being made up of organised, regular spiral arms.

Co-author of the study Dr Timothy Davis, also from Cardiff University's School of Physics and Astronomy, said: "This spectacular discovery challenges our current understanding of how galaxies form because we believed these features only arose in 'mature' galaxies, not in young ones."

How did the team make this discovery? 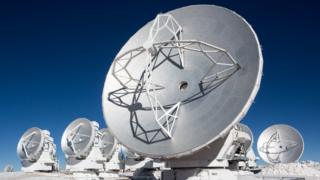 Getty Images
Here's what an ALMA telescope looks like. They're HUGE!

Dr Lelli and his colleagues used a special telescope called the Atacama Large Millimetre/submillimetre Array - or ALMA for short!

It was used like a "time machine" to see into the galaxy's past.

The research is helping to expand our knowledge of how galaxies in the early universe were formed.

According to Cardiff University, the study has come up with "one of the sharpest, direct images of a primordial galaxy ever produced which allowed the team to undertake a detailed study of its internal structure."

Wow. If you don't have a headache after reading that, you're winning at life!

Psyche mission: Everything we know about Nasa's plans