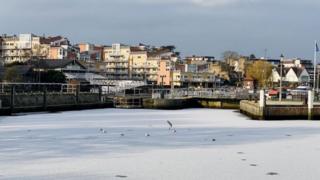 A huge part of the River Thames in London has frozen for the first time in years.

Sub-zero temperatures saw water turn to ice along a section of the Thames in Teddington, in the south west of England's capital city.

An image taken by the Royal National Lifeboat Institution (RNLI) in Teddington showed seagulls chilling on the frozen surface of the river.

In a tweet, the RNLI said they might've needed to use a smaller lifeboat as an 'icebraker' to get out onto the water because it's "not often the Thames freezes over in Teddington".

A spokesperson said "It's quite spectacular. I've lived here for 13-years and I've not seen this part of the river freeze like this."

The Thames has completely frozen over in the past, the last time being in January 1963 - the coldest winter for more than 200 years that brought blizzards, snow drifts and temperatures of -20C.

Extremely cold weather this week saw temperatures in London drop to -2C, meanwhile the UK experienced the coldest February night for 25 years - with temperatures of -23C recorded at Braemar weather station in Scotland.

The ice on the Thames was very thin, and not safe to try and walk on. But in the past it's been thick enough that an elephant could walk across the frozen river.

A history of a frozen Thames 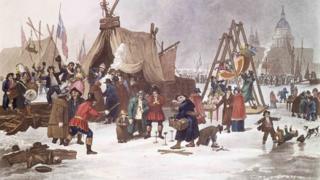 Between 1309 and 1814, the Thames froze at least 23 times and on five occasions the ice was strong enough to hold a fair on the river.

The ice was several feet thick and could support shops, pubs, fairground rides, thousands of people - and even elephants could walk across it! 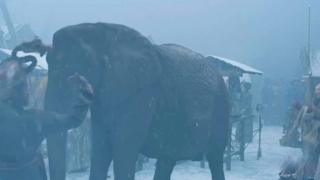 in 1814, the ice on the Thames was said to be so thick an elephant walked across it - as shown in an episode of Doctor Who in 2017

The first 'frost fair' as they were known was recorded in 1608 when the river iced up for six weeks. The last fair took place over 200 years later in 1814.

The frost fairs took place during a period of time known as the Little Ice Age, which saw an increase in cold winters in parts of Europe.