Coronavirus: Sixteen-year-old is one of the youngest vaccinated 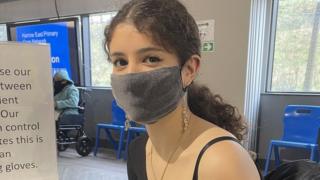 Sixteen-year-old Esther has become one of the youngest people in the country to be given a coronavirus vaccine.

She joins more than 10 million others in the UK to have received it, as part of the biggest vaccine programme the country has ever seen.

At the moment, the government is aiming to first vaccinate all those aged 70 and over, healthcare workers and people required to shield.

Then they hope to move on to millions more people aged 50 and over, and other priority groups by the spring.

Currently there are no plans for children to be vaccinated as they are at a much lower risk of being badly affected by Covid-19 if they catch it.

Prime Minister Boris Johnson praised the "colossal" effort to vaccinate 10 million people, including 90% of those aged over 75.

Esther has an inherited blood condition which led her, at the age of five, to have her spleen removed - an organ that is part of the immune system, and fights invading germs in the blood.

Because of this she is classed as being 'critically extremely vulnerable', making her eligible to get the jab now.

Like lots of other people, Esther has been shielding throughout each coronavirus lockdown.

She says she misses going out with her friends and going to school, but was very happy to get the vaccine. 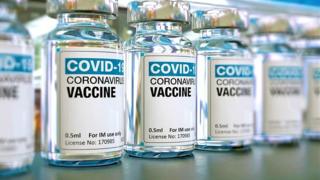 Getty Images
The World Health Organisation does not recommend vaccinating under-16s, even if they are in a high-risk group and children will not be on the list to get a vaccine

"When I knew I was getting the vaccine I was really excited because by the end of lockdown I will have immunity and won't have to shield any more," she said.

"I can't wait to go on holiday - I want to go to Croatia with my friends in the summer. I also really want to see my cousins and my Grandma Jessica".

Although Esther has now had the jab, it is important that she, and everyone else, keeps following the rules that are in place to protect us.

It will take many months until all adults have received their vaccines, but the programme is being seen as a step towards life slowly returning to normal.

When are UK schools hoping to reopen?

What is Yes Day?