Tributes have been paid to Captain Sir Tom Moore, who has sadly died.

The army veteran became famous when he raised millions of pounds for the NHS by walking 100 laps of his garden before his 100th birthday.

He was being treated in hospital for pneumonia and coronavirus, but passed away on Tuesday afternoon.

In a statement, his daughters, Mrs Ingram-Moore and Lucy Teixeira said: "It is with great sadness that we announce the death of our dear father, Captain Sir Tom Moore.

"The last year of our father's life was nothing short of remarkable. He was rejuvenated and experienced things he'd only ever dreamed of. Whilst he'd been in so many hearts for just a short time, he was an incredible father and grandfather, and he will stay alive in our hearts forever."

Lots of big names have been leaving their tributes to Captain Sir Tom and if you want to send us your own tributes, you can do so here.

More from Newsround if you're upset by the news:

What to do if someone you love has died 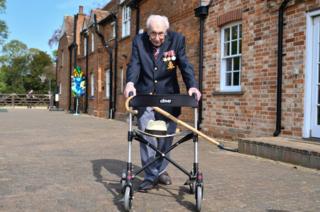 In April 2020 during the first national coronavirus lockdown - what began with Captain Sir Tom walking in his garden for charity, became a story of positivity that inspired the nation.

The Second World War veteran had accepted a small family challenge - to raise £1,000 for NHS charities by walking 100 laps of his garden before his 100th birthday.

"One small soul like me won't make much difference," he said in his first TV interview.

He went on to raise £33 million with the help of more than one and a half million supporters and it was those efforts for charity that made Captain Tom world famous in the process. 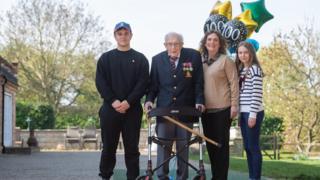 Now famous for his fundraising, Captain Sir Tom went on to achieve even more.

He performed a cover version of the song "You'll Never Walk Alone" with singer Michael Ball - the money raised went to the same NHS charities.

The single topped the UK music charts, making him the oldest person to achieve a UK number one. 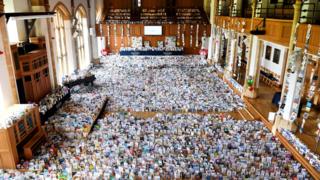 After completing 100 laps of his garden and his charity successes, Captain Tom was given the honorary title of colonel on his 100th birthday.

His special birthday was also marked in a number of other ways, including a flypast by the Royal Air Force, and he was sent more than 150,000 birthday cards from people all over the world.

And, by late April 2020, more than 800,000 people had signed a petition calling for Captain Tom to be knighted.

The following month it was announced that he would receive a knighthood from the Queen after being nominated by the Prime Minister, Boris Johnson.

What Captain Tom said after getting a knighthood... 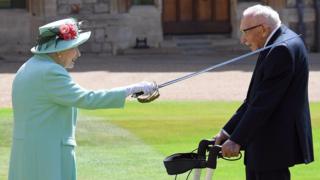 Captain Tom said he had been "given an outstanding honour by the Queen and the prime minister".

"I am certainly delighted and overawed by the fact this has happened to me," he said.

"I thought this can't be true, I've always said this won't happen and it appears it actually has.

"I certainly never anticipated that this letter would arrive for me."

Tom was born in Keighley, West Yorkshire on 30 April 1920. His dad, Wilson, came from a family of builders; his mum, Isabella, taught children at a local school.

A decade later the world suffered a financial crash meaning that people struggled for money to afford things.

A ten-year-old Tom and his family had to queue for food and many children his age were unwell because of bad conditions and poor diets.

At school he found he enjoyed working with his hands more than reading books.

"I was always a very practical boy," he said. "The sort of toys I liked would be a piece of wood, some nails and a hammer."

But his real passion was motorbikes. At the age of 12, Moore discovered one lying in a barn and bought it for half a crown (or 12 and a half pence in today's money).

He took the bike home and repaired it.

He left school to start an apprenticeship in civil engineering (deciding where roads and bridges should be built in towns and cities), but there was barely any time to finish that before the war started. 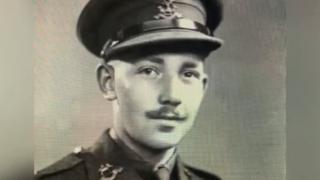 After joining the British army during the Second World War, Tom said he was "too young to feel frightened".

He spent the beginning of the war in Cornwall, preparing to defend the coast from a German invasion, and learned how to drive tanks.

He rose to the rank of captain while serving in India and Myanmar, then known as Burma.

While there, soldiers fought in thick jungles, home to poisonous snakes and hot heavy rain that lasted for six months a year.

With his knowledge of motorbikes, Captain Tom worked as a 'dispatch rider', using motorbikes to get messages to the front line.

He loved the bikes, but the job was very dangerous. Once the engine started, there was no stopping or going back. 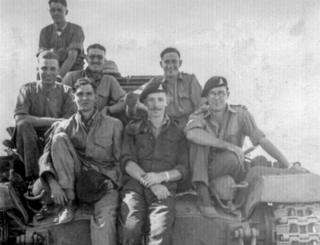 The soldiers who fought in Burma are often called the "forgotten army" because they didn't get as much publicity as the troops fighting the Nazis in Europe during the Second World War.

When Japanese forces were eventually pushed back, Captain Tom returned to England to train recruits how to drive tanks.

On VE Day, the moment when the war ended in Europe, Captain Moore's thoughts were with his mates still fighting the Japanese in the Far East. "They didn't get a day off," he said.

Life after the war

Captain Tom left the military in 1960, and took a job as a sales manager for a roofing company.

He raced motorbikes around Yorkshire, winning various cups and medals. He married his second wife Pamela in 1968 and had two children - Lucy and Hannah. 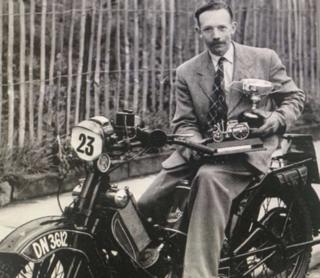 After retiring, Captain Tom moved into his daughter Hannah's home in the Bedfordshire village of Marston Moretaine.

There he walked early each morning to let the dogs out and enjoyed spending time with his family including his grandchildren Benji and Georgia.

After treatment for a broken hip he said he received "marvellous service" from the NHS.

When the UK locked down for the coronavirus pandemic, he saw a chance to give something back.

For millions stuck at home, Captain Tom's sponsored walk was a much-needed symbol of hope and positivity.

His charity fundraising gave him worldwide fame, but he took it all in his stride - with a smile, a glint in his eye, he always had a wise word or two.

"Please remember," he said repeatedly, "tomorrow will be a good day." 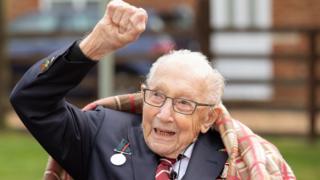 Captain Sir Tom Moore: Your tributes to the charity fundraiser

Coronavirus: What to do if someone you love has died

379 comments
Back to top
unknown