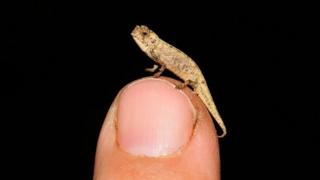 Frank Glaw
The tiny Brookesia nana perched on a fingertip

Scientists have discovered a new species of chameleon in Madagascar, which could be the smallest in the world!

The new species is called the Brookesia nana, and is about the size of a sunflower seed.

The chameleons were discovered by a team of international scientists on a research trip to the northern rainforests of Madagascar.

So far scientists have only found two of the Brookesia nana in the wild, one male and one female, and are now studying them to find out why they evolved to be so tiny.

Animals found in the strangest places!

Why wombats have CUBE-SHAPED poo! 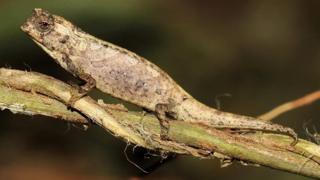 From observing the Brookesia nana, researchers found that it hunts for food on the rainforest floor using its long sticky tongue to catch mites, and hides from predators at night in blades of grass.

"We are constantly identifying new species from Madagascar and describing them," said Mark Scherz, an expert in reptiles who helped to co-write the report.

"Even among the beautiful and charismatic chameleons, there is a huge amount that we still have to learn" he said.

The male Brookesia nana has a body length of just 13.5 mm, and a total length of 22mm (including its tail) making it the smallest known male of around 11,500 known species of non-avian reptiles.

However, researchers are worried about the threat of deforestation to the rainforests where the Brookesia nana live, as the land is being cleared for farming.

In their reports the scientists recommended that the chameleon be listed as critically endangered in the International Union for Conservation of Nature's (IUCN) Red List of Threatened Species to help protect it, and its habitat.

The researchers who discovered the tiny chameleons published their findings in the Scientific Reports journal.

Check out these animals helping other animals

Madagascar: Teens learning how to protect forest with new ways of farming