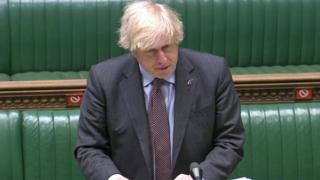 Prime Minister Boris Johnson has announced that schools in England will not reopen after February's half-term break.

Speaking to MPs in the House of Commons, Mr Johnson said getting children back to school was a priority for the government but that it would depend on the rollout of the vaccine going to plan.

If the government reaches its target of vaccinating the four most vulnerable groups by mid-February, it would hopefully, "therefore be safe to begin the opening of schools for Monday 8 March," he said.

Head teachers say the delay is "no surprise" - and reopening must be done safely.

And Labour says half term should be used to vaccinate teachers to help schools stay open. 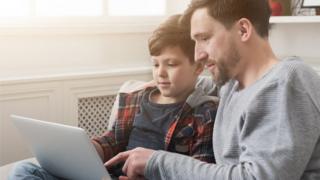 Getty Images
Home learning will carry on for a bit longer

He said that schools would get a two weeks warning to prepare for students going back so teachers and parents can get ready.

He went on to say that the government would offer support for those who have fallen behind in their studies because of home learning, such as summer schools and money for tutoring schemes.

Free school meal provisions for pupils not in school, like food parcels and vouchers, will continue until schools return.

When will schools reopen in other UK countries?

Pupils in Wales and Northern Ireland will be learning online until after February half term, and in Scotland, the government hopes to have children back in classrooms in February.

When will England come out of lockdown?

The Prime Minister said it was too early to say exactly when restrictions will definitely be lifted as a lot depends on the rates of infections coming down and pressure on the NHS being reduced but he did say the government would look at all the information and draw up a plan by 22 February.

360 comments
Back to top
unknown