Government facing legal action over pesticide that is harmful to bees 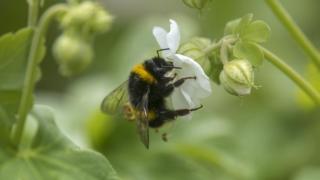 Getty Images
Bumblebee's sleep patterns have been shown to be affected by pesticides - they are less likely to find open flowers to pollinate during the darker night hours.

A group of environmental charities, collectively called the Wildlife Trusts, has said they are taking legal action against the UK Government.

It is because they have given the go-ahead for a type of pesticide to be used on certain crops in the UK that can be harmful to bees and other essential pollinators.

The neonicotinoid pesticide called Thiamethoxam is banned across many parts of the Europe, but as the UK is no longer a part of the European Union, it is able to disagree with certain EU laws.

The Wildlife Trusts has written to Environment Secretary George Eustice, saying they will proceed with the legal case unless the government can "prove it has acted lawfully" by lifting the ban in the UK. 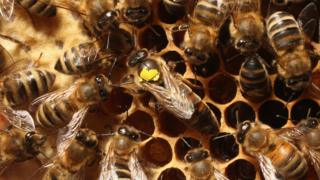 Many studies have found neonicotinoids cause harm to pollinators such as honey bees, butterflies and other types of insect, and has been linked to the wider global collapse in biodiversity.

Earlier this month, a report, published by Bristol University, showed that these chemicals disrupted the sleep patterns of bumblebees.

Those exposed to the pesticide were more more likely to emerge at night, so less likely to find open flowers and be able to gather pollen.

However the government say they will be limiting the use of the pesticide, and that the risk to bees was "acceptable".

They justify their decision because of the "potential danger" to crops caused by the beet yellows virus. It is a disease transmitted by aphids which can cause damage to a crop called sugar beet, the roots of which produce sugar. 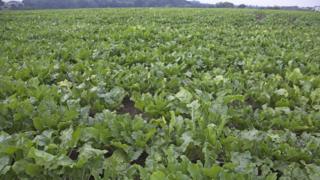 Around 3,000 farmers grow sugar beet in the UK, and the wider industry supports around 9,500 jobs in England.

The government say that because sugar beet doesn't produce flowers, bees are unlikely to come into contact with the chemical, and that alternative pesticides will be used to protect any wild flowering plants in or around the sugar beet fields.

But the Wildlife Trusts say there was no new evidence to say the chemical is safe to use.

Research shows that the highly toxic chemicals can persist in the wider ecosystem for some time, potentially to be absorbed by wildflowers that pollinators then visit. 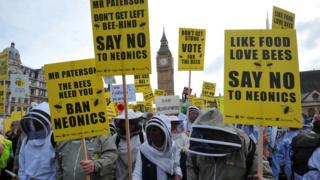 Getty Images
Campaigners have been argued against the use of neonicotinoid pesticides for years.

Glen Jeffery, a Professor of Neuroscience from University College London, said he felt "horror" when he learned of the government's decision.

He went on to warn of the "ridiculous situation" where in parts of California thousands of beehives are trucked from Texas and from Florida into California to pollinate crops due to the shortage of bees.

Hundreds of thousands of people have now signed various online petitions against the use of the chemical.

If you cannot see the interactivity on this page, click here.