Holocaust Memorial Day: Victims to be remembered with light 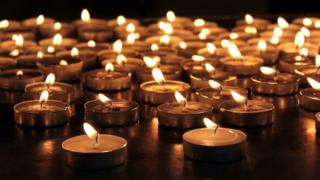 British landmarks are to be illuminated with purple light to mark Holocaust Memorial Day.

The annual event honours the millions of Jews and other minorities murdered during the Second World War by the Nazis.

Wembley Stadium, Cardiff Castle and the Tyne Bridge are just a few of the places that will glow in violet tones to illustrate this year's theme - being the light in the darkness.

People are also being encouraged to light a candle in their windows at 8pm, and remember those who died.

How Jewish people were treated during the Holocaust

The coronavirus lockdown means that his year's memorial ceremony will only be streamed online, but the event organisers believe Holocaust survivors can be an inspiration to us all, as we face difficult times.

Karen Pollock, chief executive of the Holocaust Educational Trust (HET), said: "The Holocaust is a story of loss and destruction - there is little you can grab onto about that episode in history that can give you any source of hope or positivity.

"Having said that, the survivors' strength and resilience gives us hope and positivity.

"There has been real distress and pain and suffering felt in this country and around the world in this pandemic.

"But the survivors I spoke to - many who are shielding - are the epitome of strength and are getting on with it."

'We can learn from it'

Ms Pollock added that now, more than ever, the first-hand accounts of the survivors are important to hear.

She said: "A lot of people might think it happened somewhere else, to someone else, but what we understand really is that the Holocaust happened to people in this country - survivors living here now, or people who fled and became British citizens - but also those members of the armed forces who liberated (concentration camp) Bergen-Belsen in April 1945.

"This is part of British history.

"So my message to people this year is this: Hear the stories, listen to the eye witnesses, find out about what happened to these people, and understand that when we are learning about the past, it is for the sake of learning history, but it is also because we can learn from it."