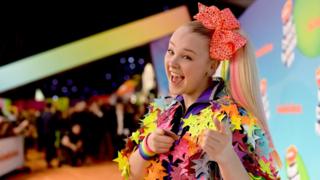 Getty Images
The 17-year-old singer, actress and dancer is known for her giant bows

American Youtuber, dancer and singer Jojo Siwa has come out.

Jojo took to social media to share the news. On Twitter she posted a picture of herself wearing a T-Shirt with the words 'Best. Gay. Cousin. Ever.' printed on it. She captioned the photo with the words: "My cousin got me a new T-shirt".

So far, the 17-year-old's tweet has been liked more than 1.2 million times and lots of fans have been responding with kind words.

Jojo shared a video on TikTok miming and dancing to Lady Gaga's hit song Born This Way while rocking a rainbow covered bow earlier this week. Some believed this appeared to hint at Jojo's big news, however, she's now confirmed that she's LGBTQ+.

The Youtuber went on Instagram live to engage with fans after coming out. One follower asked Jojo what label she was to which she responded: "I have thought about this, and the reason I'm not going to say this answer is because I don't really know this answer. I think humans are awesome, I think humans are really incredible people. Right now, I'm super duper happy and I want to share everything with the world, I really do, but I also want to keep things in my life private until they are ready to be public.

'Right now what matters is that you guys know that no matter who you love, that it's okay and that it's awesome and the world is there for you."

Lots of celebrities have reached out and shown their support for Jojo following her announcement.

YouTube comedian Colleen Ballinger said: "I've known you a long time and this is the happiest I've ever seen you."

Rich list: Which young YouTubers are in the money?

284 comments
Back to top
unknown