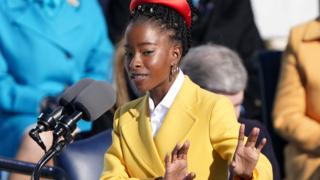 Reuters
Amanda Gorman's performance of her poem, The Hill We Climb, was a highlight of the inauguration ceremony

Joe Biden has been sworn in as the 46th US president at the US Capitol in Washington.

Vice-President Kamala Harris has taken her oath too - becoming the first woman to hold that position.

But one person who also made headlines during the ceremony is poet Amanda Gorman.

At the age of 22, the Los Angeles-born writer and performer is the youngest poet to perform at a presidential inauguration.

Can Joe Biden find a way to unite the United States?

Gorman told the BBC's World Service she felt "excitement, joy, honour and humility" when she was asked to take part in the ceremony, "and also at the same time terror".

Her poem, The Hill We Climb, underlined the theme of unity set out by the new president.

"I really wanted to use my words to be a point of unity and collaboration and togetherness," she said before the ceremony.

"I think it's about a new chapter in the United States, about the future, and doing that through the elegance and beauty of words."

Gorman completed her poem on 6 January, the day the Capitol in Washington DC was stormed by supporters of former President Donald Trump.

Her poem speaks of "a force that would shatter our nation rather than share it" and "destroy our country if it meant delaying democracy".

It continues: "This effort very nearly succeeded/But while democracy can be periodically delayed, it can never be permanently defeated."

Speech impediment 'made me the performer that I am' 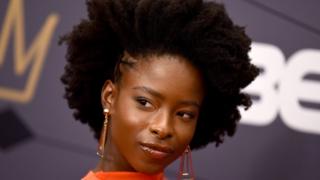 Born in Los Angeles, California, in 1998, Gorman had a speech impediment as a child - something she shares in common with President Biden.

"It's made me the performer that I am and the storyteller that I strive to be," she said in a recent interview with the Los Angeles Times.

She published her first book, The One for Whom Food Is Not Enough, in 2015 and will publish a picture book, Change Sings, later this year.

Donald Trump: What happened on the President final day in the job?

Biden inauguration: How will this year's ceremony be different?

Inauguration 2021: We answer YOUR questions about what happens and when