If you have ever loved a dog, you will know they are capable of giving you just as much love back, if not more!

That is certainly true for the gorgeous Boncuk, whose owner Cemal Senturk, lives in Trabzon in Turkey.

When Cemal was admitted to hospital, Boncuk reportedly followed the ambulance to the hospital, where she waited for her companion to emerge.

A security guard told reporters the concerned pooch would arrive every morning at around nine in the morning and wait until the sun went down to return home to bed.

She would not go into the hospital, but she would poke her nose in every time the door opened - just in case she could see any sign of Cemal.

Thankfully there was a beautiful reunion six days later, with Boncuk looking over the moon to see her best friend again.

Cemal said he missed her while he was in hospital, and said dogs are special because they bring people joy, provide companionship and make people happy. We 100% agree!

Cemal and Boncuk's story is not the first time we have heard of very patient canine companions. 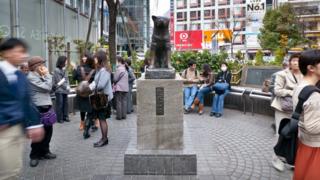 Getty Images
A monument to Hachiko

In 1925, a Japanese Akita called Hachiko displayed immense loyalty to his owner by waiting outside Shibuya train station in Tokyo for more than nine years.

Hachiko's owner, Hidesaburo Ueno was a professor at a university and took the train to work every day. Hachiko used to wait outside the station at the exact time his train was due in to greet his owner home.

Touchingly, Hachiko returned to the train station every day for the next nine years, nine months and fifteen days, waiting for Ueno to get off the train.

Friendly passengers made sure Hachiko had food and water while he waited, and he became a local hero to the people of the city.

Hachiko died at the age of 11. Later a statue was placed in the spot he used to wait to honour his loyalty and remind people of his dedication to his best friend. 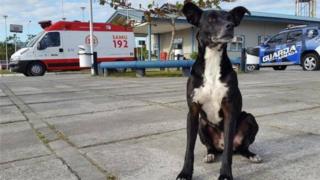 In 2016, Negao's owner was rushed to the hospital in Santa Catarina, Brazil. She was said to have followed the ambulance to the hospital and waited outside for some news.

Sadly, the dog's companion had contracted an infection and died shortly afterwards.

For eight months, Negao remained outside the hospital, having been cared for by the staff and passers by.

It has been reported, the dog had been adopted by two separate families but even now keeps escaping and returning to wait outside the hospital.

A member of staff at the hospital said, "He will stay here with us until he decides if he wants to leave or not," she said. "As long as he remains here, we will give all the care, warmth and love he needs." 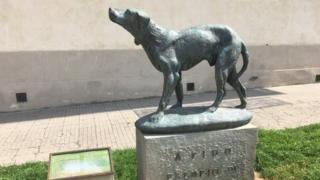 Getty Images
A monument to Fido - a loyal and faithful boy

In November 1941, a local brick maker in Borgo San Lorenzo, which is a town in Tuscany, Italy, found a stray dog lying by the roadside.

Carlo took the dog home and nursed him back to health, eventually deciding to adopt the dog and name him Fido, which means 'faithful' in Latin.

Every morning for the next two years, Fido accompanied Carlo to the bus stop on his way to work, and when he arrived back every day, Fido was there to greet him.

Sadly, in 1943, Carlo was killed in a bombing of the factory he worked in. It was targeted by enemy forces during World War II.

That evening however, Fido arrived at the bus stop, expecting his companion to get off and greet him, but he didn't arrive.

For the next 14 years, Fido returned to the bus stop and waited for Carlo. It is thought he returned more than 5000 times.

The mayor of Borgo San Lorenzo awarded Fido a gold medal for his loyalty and faithfulness. He died age 16 and is said to be buried next to Carlo.

A bronze statue of Fido stands in the main town square.

This is a story that dates back to around the mid 1800s.

Legend has it that a Skye terrier called Bobby stood guard over his owner's grave for 14 years after he died.

He wasn't there all day mind - Bobby is said to have left his master's grave each day at one o'clock, to pop for a free meal at a nearby cafe!

There is a bronze statue in Edinburgh, Scotland where people rub Bobby's nose for good luck.

Some historians say the story is fictional but that doesn't stop tourists flocking to see him!

Animals in the snow: Top tips to keep pets safe in winter