Virgin rocket: Why this plane carrying a rocket launcher is a big deal for space exploration 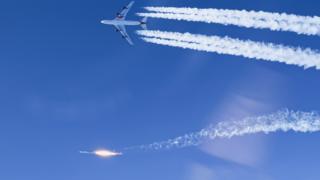 There was a big moment for space fans on Sunday, as the rocket company, Virgin Orbit, successfully put its first satellites into space.

Virgin Orbit is not like any other method of launching satellites to orbit, as it uses an out-of-service 747 jumbo jet.

This is important because it means it is physically possible to send up spacecraft from anywhere in the world, for a much lower cost than normal rocket launches.

Up and away! Nasa to allow tourists on ISS 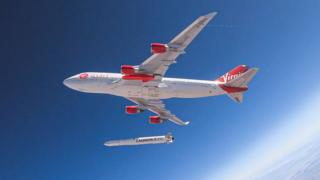 At the moment, the only place that has a special licence to launch these satellite-carrying-planes is California in the United States.

But it is hoped many more places will be granted permission to launch soon.

The company have said they hope to launch from Cornwall this summer to coincide with the the G7 summit - an international economy meeting - taking place in June.

So how did a normal plane launch a satellite?

The specially modified jet, named Cosmic Girl, took off from California's Mojave desert on Sunday morning to fly out over the Pacific Ocean.

Just under an hour later, and cruising at 35,000ft (10,500m), the jet turned quickly to the right, dropping as it did and releasing the 21m-long rocket that had been clamped to its underside.

Within seconds this booster, called LauncherOne, had ignited its engine and was climbing to space. 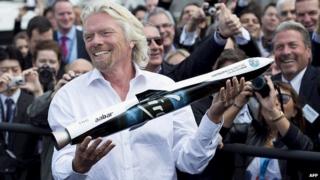 AFP
British businessman Sir Richard Branson, who owns Virgin Orbit, presented the concept of the LauncherOne back in 2012.

A couple of hours later, the team behind Virgin Orbit, received confirmation that the satellites onboard the launcher, had made it successfully into space.

Why is this a big step?

Sending things into space has always been massively expensive and, due to that mostly carried out by governments - but in recent years, there has been growing interest in getting smaller, lower-cost satellites into space.

There are currently thousands of larger, man-made satellites in space orbiting the Earth. 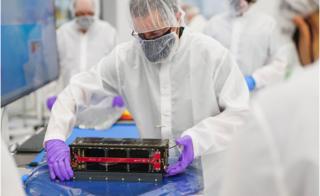 Virgin Orbit
The LauncherOne successfully delivered shoebox sized satellites like this one, into the Earth's orbit

Some are used to monitor weather and climate on Earth, whilst others are used to explore the rest of the universe.

Many are also used for communications, such as mobile phones, the internet and TV.

But some of the satellites on the LauncherOne were the size of a shoebox and have mostly been developed by university research teams. They will be used as part of Nasa educational missions.

It's hoped that lower-cost spacecrafts can help smaller companies or organisations get their equipment into space, which could open up space research to many more people.

Shoot for the Moon: The big space missions in 2021