Football: Should close-contact celebrations be banned? 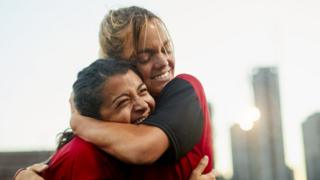 Footballers in four major football leagues have been reminded that "handshakes, high fives and hugs must be avoided" - which means players can't celebrate goals in the way they normally would.

The guidance from the Premier League says that players must maintain social distancing, and "unnecessary contact, particularly between opposition clubs", with things like shirt swapping also banned.

Players have also been reminded of the importance of good hygiene and wearing face masks.

What a ripper! Joe Wicks caught farting during live workout

The Football Association (FA) , English Football League (EFL) and Barclays Women's Super League have also introduced similar measures and have written to clubs to remind them of their responsibilities.

But many players and managers aren't happy about the guidance.

Cardiff City manager Neil Harris has called the efforts to stop players celebrating "a joke", and Manchester City's Pep Guardiola said he "didn't know" whether it would be possible to curb celebrations.

Why have these rules been introduced? 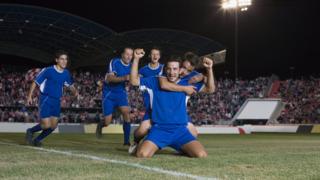 He said the league was "fortunate to be able to continue to play and bring our competition to fans".

In a joint statement the FA, Premier League and EFL said:

"The game has a responsibility, and during this critical period it is down to everyone involved to ensure they follow government rules and our protocols."

We have seen the huge contribution players have made to the national effort and they must continue to use their influence in demonstrating the importance of following the rules.

On Wednesday, Minister for Sport, Nigel Huddleston, said: "Everyone in the country has had to change the way they interact with people and ways of working. Footballers are no exception.

"Covid secure guidelines exist for football. Footballers must follow them and football authorities enforce them - strictly."

What have football managers and players been saying?

Brighton boss Graham Potter said stopping goal celebrations was "doable" but added that it would need a change in mindset to ensure the measures were followed.

He said: "We are going to do it, we are going to respect the protocols. But the moment you score a goal and one guy runs and the others don't go to celebrate with him, it is weird and uncomfortable." 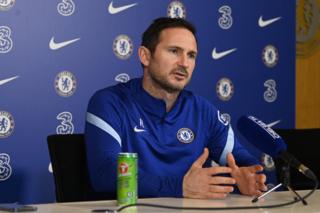 Chelsea manager Frank Lampard said he will suggest to his players that they stop celebrating during training, and said his team already practise social distancing as much they can at the training ground.

He said: "On the pitch it can be difficult at times clearly, because you have to train and get close to each other.

"It's something I will pass on to the players, and you see a lot of these group hugs now when they win a five-a-side [in training], so that will be something we'll look at."

West Bromwich Albion boss Sam Allardyce said the rules would be followed to keep football matches on but added he was "peeved" that players were being called "irresponsible".

He said: "We're getting tested two or three times a week. We have sterilisers, masks and independent monitors at the training ground making sure we don't do this or that."

Cardiff City manager Neil Harris said he thinks it's impossible to control goal celebrations, saying: "If they are that worried, stop the game."

Harris added: "The raw emotion of scoring a goal in that heat of the moment, you cannot control that.

"Calm people might be able to score, think about it and say 'oh actually, yes, we have to be careful.' But if they are that worried about it, stop the game. Stop playing."

What are the arguments for and against tougher rules for footballers? 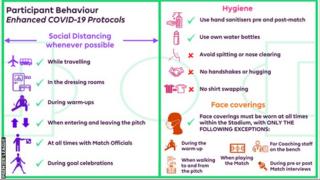 For almost a year, social distancing rules mean most of the population have been unable to hug loved ones, so seeing players hugging each other after goals or celebrating together in changing rooms, can seem very unfair.

There have also been cases of footballers breaking coronavirus restrictions when not on the pitch. Incidents like this have made people angry as they feel that some footballers think they don't need to follow the rules like everyone else.

In recent weeks, many clubs have also reported outbreaks of coronavirus, leading to several Premier League matches being postponed.

Elite footballers are among the most tested people in the country, with those in the Premier League and English Football League (EFL) tested for coronavirus twice a week.

Given the outside nature of the sport, the risk of transmission of the virus is also lower.

What sporting events are going to happen in 2021?

2021 sports calendar - your guide to everything that's going on!

68 comments
Back to top
unknown