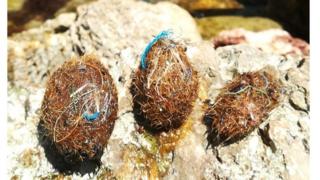 Plastic pollution is a big problem for seas and oceans around the world, but now scientists have discovered a "natural mechanism" for catching and removing plastics from the water.

Researchers studied Posidonia oceanica on the coast of Majorca, Spain - it's a species of seagrass known as Neptune Grass which is only found in the Mediterranean sea.

Their study, published in the journal Scientific Reports, found that it can form natural 'Neptune balls' which essentially filter, trap and then remove plastics from the water.

In 2018 and 2019, they counted the number of plastic particles found in these seaballs which had washed up on four beaches in Majorca - there was plastic debris in half of them.

What are 'Neptune balls'? 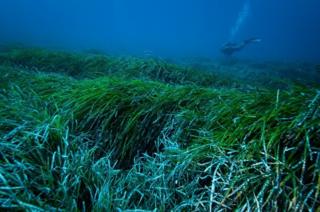 Neptune Grass grows in dense 'prairies' that look a bit like large meadows under the sea.

It's in these prairies that remains of the seagrass, such as leaves which fall off, form 'Neptune balls' with other natural materials from the seabed. Plastics in the water can then be caught up and become tangled into these balls.

Marine biologist and lead author of the research, Anna Sànchez-Vidal, is part of the University of Barcelona's Department of Ocean and Earth Dynamics.

She said the microplastics which get trapped are mainly "filaments, fibres and fragments of polymers which are denser than the sea water".

For example polyester which is used in lots of drinks and food packaging.

How is the plastic then removed from the sea?

So we know how the plastic is trapped and 'filtered' from the water, but how is it then removed from the sea?

Well according to Professor Javier Romero, "periods of strong waves" during storms violently drive the balls out of the prairies "and a certain part ends up in the beaches".

"We don't know where they travel," Anna Sànchez-Vidal added. "We only know that some of them are beached during storms."

She said: "We cannot completely know the magnitude of this plastic export to the land. However, first estimations reveal that Posidonia balls could catch up to 867 million plastics per year".

The plastics we find floating in the sea are only a small percentage of everything we have thrown onto the marine environment.

"We show that plastic debris in the seafloor can be trapped in seagrass remains, eventually leaving the marine environment through beaching," Ms Sanchez-Vidal said.

She describes it as a "continuous purge of plastic debris out of the sea".

The Mediterranean sea has large areas covered by the seagrass - which can be up to 40 metres deep!

It's thought this natural way of clearing plastics has a "significant value" for the Mediterranean sea which has high quantities of floating plastic, but also in the seafloor.

The experts concluded: "This is why we need to protect and preserve these vulnerable ecosystems."

They added however, that "the best environmental protection strategy to keep oceans free of plastic is to reduce landfills".

Microplastics found in snow close to summit of Mount Everest