WWF: Forests twice the size of the UK were destroyed in just 13 years, new report says 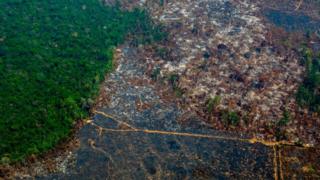 Forests across the world which together cover an area nearly twice the size of the UK were destroyed in just 13 years, according to a new report.

The study by wildlife charity The World Wide Fund for Nature (WWF) focused on 29 countries in Latin America, Asia and Africa where deforestation has been widespread.

It found that 43 million hectares (166,000 square miles) of forests and habitat in those areas had been destroyed between 2004 and 2017, leaving large areas of remaining forests and the wildlife that live in them under threat.

The fastest rates of deforestation and land conversion were found to be taking place in a number of key locations: the Brazilian Amazon and the Cerrado, the Bolivian Amazon, Paraguay, Argentina, Madagascar, and Sumatra and Borneo in Indonesia and Malaysia.

Latin America has been particularly hard hit, causing mammal, fish, bird and reptile populations to fall by 94% on average since 1970.

Want more on the environment?

What is Prince Charles' Earth Charter?

Why has there been so much deforestation?

Lots of the damage to the forests has been driven by demand for land to house livestock like cows and sheep and to grow crops like soy. Some of the land was also used to build roads and for mining purposes.

WWF has said that the destruction of the habitats in places like the Amazon is one of the biggest contributors to the loss of nature and climate change, as the cleared or burned forests release carbon that trees and plants in forests would normally store.

How does deforestation affect climate change?

Trees and plants take in carbon dioxide and release oxygen. When they're cut down, burned or left to rot, the carbon dioxide they store is released into the air and this contributes to something called global warming.

This happens when greenhouse gases trap heat from the Sun, causing the Earth's surface to get hotter.

Is anything being done to help the situation?

The charity has called for the government to use the Environment Bill, which is currently going through Parliament, to put in place stronger measures to stop companies in the UK from destroying forests in order to produce products like soy and palm oil. 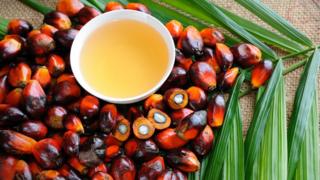 Getty Images
Palm oil is an ingredient used in many products

The bill in its current form only aims to stop illegal deforestation, but WWF say forests could still end up being cut down in line with local laws and this could also encourage countries to relax their rules.

WWF chief executive Tanya Steele said: "Nature is in freefall and our climate is changing dangerously - protecting precious forests like the Amazon is a vital part of the solution to this global crisis.

"We have an opportunity to stop the things we buy and the food we eat here in the UK from causing the destruction of nature overseas.

"That's why we need urgent action from the government to implement ambitious new laws to get deforestation out of our supply chains."

Who else is being impacted? 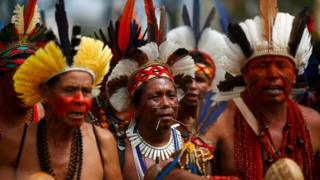 The report also highlighted the importance of protecting the indigenous people and local communities who live in and rely on the forests. It says they should be put in control of the land to help conserve it.

"Nature, for us, is the life of the Indian. Why? It gives pure oxygen, it gives natural food to us, hunting, fishing, native fruits of the jungle, medicine, so, it is important to us, because we live off the jungle," said Awapy Uru-eu-wau-wau who is a chief of the Uru-eu-wau-wau indigenous peoples in central Rondonia, Brazil.

He said his community faced deforestation and fires set by "invaders" who threatened their way of life.

The deforestation levels tracked by the WWF report account for just over half (52%) of the total deforestation that took place in Latin America, sub-Saharan Africa, south east Asia and Oceania between 2004 to 2017.

It suggests deforestation is also taking place widely outside the hotspots that were monitored.