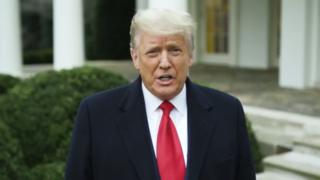 Donald Trump's accounts and posts have been blocked by some of the biggest social media companies.

It's after the rioting at the Capitol building in Washington DC, the US capital.

As the protestors were attacking the Capitol Mr Trump send a video to supporters saying "I love you" and calling them patriots - before telling them to go home. He also repeated false claims about election fraud.

Twitter locked his account and said it required the removal of three tweets or president's account would remain locked for good if the tweets were not removed.

Meanwhile, Mr Trump has been banned from Facebook and Instagram "indefinitely", meaning they've no current plans to allow him back.

Why were there riots in Washington DC?

Social Media and the US election

What is the Senate and who just won control of it? 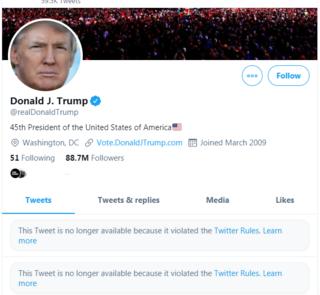 @realdonaldtrump/Twitter
Why has this action been taken?

Before the violence, President Trump had told supporters on the National Mall in Washington that the election had been stolen. Hours later, as the violence mounted inside and outside the US Capitol, he appeared on video and repeated the false claim.

The march was partly organised online, and social media is a place where lots of fake news about the election are repeated. The companies that run the sites are under pressure to do more to moderate the content posted and have been unhappy with what Donald Trump says on previous occasions.

Twitter said it required the removal of three tweets for "severe violations" of its rules and said the president's account would remain locked for good if the tweets were not removed.

At first it didn't take down the video, instead removing the ability to retweet, like and comment on it and another tweet. However, it later removed them, and suspended the outgoing president.

YouTube already had a policy to remove fake news about mass election fraud, which it applied to the president. It said it removed the video because it "violated policies on spreading election fraud". 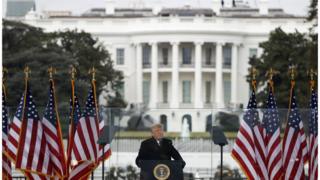 Facebook also said it is currently looking for and removing other content that incited or supported the storming of Capitol Hill.

The company told the BBC: "We removed it because on balance we believe it contributes to rather than diminishes the risk of ongoing violence."

The violent protests in the Capitol... are a disgrace. We prohibit incitement and calls for violence on our platform. We are actively reviewing and removing any content that breaks these rules."

87 comments
Back to top
unknown